January 20, 2020 was the compliance date of the cooperative research provisions in 38 CFR§16.114 of the 2018 Requirements. As of January 20, 2020, all VA Non-Exempt Human Subjects Research approved or transitioned to follow the 2018 Requirements of the Common Rule  must use a single IRB unless an exception applies to the research activity if more than one institution is engaged in the research and any of the following applies to the multi-site research:

Please note: The cooperative research provisions (also commonly referred to as the “single IRB” requirement) only applies to those institutions that follow the 2018 Requirement. For example, if VA was conducting an industry-funded clinical trial with 14 universities, 3 VA Facilities, and 2 Department of Defense (DoD) Facilities with no other federal support or funding involved, the VA and DoD Facilities are required to use a single IRB unless an exception applies. 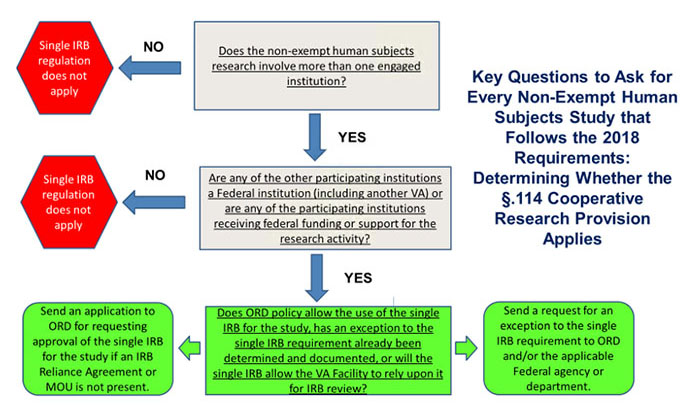 Example: Request for sIRB exception: Comparison of X vs. Y, A. Investigator, M.D.

Application Process for Use of a Commercial IRB Approved by ORD:

*If the request for reliance on a commercial IRB is time-sensitive (e.g. the sponsor requires the VA

Facility to enroll the first participant within one week of site selection), email and/or call:

Note: Do not submit an Institutional Review Board (IRB) Reliance Request Form to ORD for a commercial IRB reliance request.

a. Commercial IRB Authorization Agreement (only fields to complete are the name of the VA facility, Federalwide Assurance (FWA) number, and the signatures and dates of the signatories); and

b. Local template for standard operating procedures (SOPs) to modify for use of the commercial IRB

Note: Submit each as soon as you have completed them to ORD and ORO.

**Do not update your Federalwide Assurance until ORO has informed you that you can proceed.**

Current List of Commercial IRBs Approved by ORD for VA Facilities as of April 8, 2020