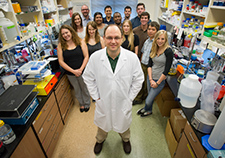 Human cells, including neurons in the brain, contain thousands of proteins that work together to produce or perform actions such as breathing, running, talking, and remembering. Molecular chaperones are a group of enzymes that ensure the proper assembly and disassembly of these proteins and protein complexes.

"Without chaperones, nothing would work properly," explains Dr. Chad Dickey of the James A. Haley VA Medical Center in Tampa and the University of South Florida (USF). According to Dickey, his lab, The Biology of Degenerative Diseases Lab, and others have begun to show that nearly all of human disease is in some way affected by chaperones.

There are more than 250 chaperones in humans, each of which could be a drug target for human diseases. The lab is focusing on chaperones affecting a group of more than 15 neurological degenerative diseases collectively termed "tauopathies," which are a class of neurodegenerative diseases associated with the build-up of the toxic tau protein in the human brain. The best-known of these illnesses is Alzheimer's disease. Others include Parkinson's disease and traumatic brain injury.

Dickey and his collaborators have identified ways to manipulate chaperones such that they reduce the toxicity of the tau protein. If these chaperones can be harnessed, it might become possible to destroy tau protein in the brain, fix tau that is malfunctioning in brain neurons, or preserve malfunctioning tau in a way that makes it less toxic to the brain—all while minimally influencing the other proteins in brain cells that are necessary for proper function and survival.

This approach, writes Dickey on his lab's website, "will potentially provide us with therapies to halt and possibly reverse [Alzheimer's] progression." He adds that one of the drugs the lab has identified as a chaperone regulator is in the pipeline for clinical trials, with other drugs not far behind.