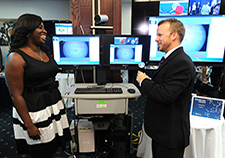 VA has been expanding the use of telemedicine. VA experts showed some of the technology to journalists at a 2013 event at the National Press Club. (Photo by Robert Turtil)

VA has been expanding the use of telemedicine. VA experts showed some of the technology to journalists at a 2013 event at the National Press Club. (Photo by Robert Turtil)

The Sept. 1, 2014, issue of JAMA Ophthalmology included the results of a study on the effects of a diabetic teleretinal screening program on eye care use and resources. One of the study's authors, Dr. Mary G. Lynch of the Atlanta VA Medical Center and Emory University, was subsequently interviewed by medicalresearch.com.

Since 2006, Lynch explained, VA has been systematically using teleretinal screening of patients with diabetes to screen for retinopathy (a complication of diabetes that can result in impairment or loss of vision) in its primary care clinics.

Lynch and the other members of the research team looked back at the medical records of 465 patients who had undergone diabetic teleretinal screening at the Atlanta VA's community-based outpatient clinic. The team found that although teleretinal screenings can be accurate and sensitive for a number of visually significant diagnoses, they create additional burdens for hospitals in terms of referrals and new examinations generated by the screenings' results.

Notwithstanding the extra workload, Lynch concluded, "teleretinal imaging in the primary care setting is a highly effective tool to screen patients for eye disease. VA and other health care systems are going to have to look at innovative ways of bringing basic eye care services to the community in a cost-effective way. Telemedicine is going to be one of those methods."