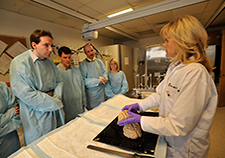 PBS highlighted data from the Bedford VAMC's brain repository revealing that the brains of 76 of 79 former NFL players showed evidence of chronic traumatic encephalopathy (CTE) upon examination. In addition, Bedford researchers examined the brain tissue of 128 football players who, before they died, played the game at high school level or above, including professionally. Of that sample, 101 players (80 percent) tested positive for CTE.

VA and Boston University researcher Dr. Ann McKee, director of the brain bank, told Frontline that the findings suggest a clear link between football and traumatic brain injury. She said, "The higher the level you play football, and the longer you play football, the higher your risk."

CTE occurs when repetitive head trauma begins to produce abnormal proteins in the brain known as "tau." The tau proteins essentially form tangles around the brain's blood vessels, interrupting normal functioning and eventually killing nerve cells themselves. Patients with less advanced forms of the disease can suffer from mood disorders, such as depression and bouts of rage, while those with more severe cases can experience confusion, memory loss, and advanced dementia.