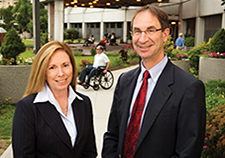 The Samuel J. Heyman awards, also known as "Sammies," are presented by the nonprofit, nonpartisan Partnership for Public Service to federal employees who have made a significant contribution to the nation. Bauman, Spungen, and the center they direct have made great progress in understanding the effects of spinal cord injury on the body. Their work helped show that people with spinal cord injury are at a markedly increased risk for heart disease.

The two researchers, based at the Bronx VA Medical Center, were the first to describe, and then treat, an asthma-like lung condition common in those with higher levels of paralysis. They have developed approaches to make it easier for paralyzed patients to undergo successful colonoscopies. They have been partners and collaborators at VA for more than 25 years.

In presenting the medals, Secretary McDonald told the audience that "any research institution would be proud to have these leading scientists, but they have chosen to dedicate their careers to serving Veterans at VA, and we are proud to call them our own."