The Power and Perils of Electronic Health Records 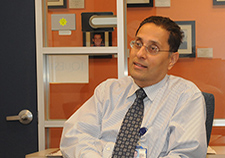 Dr. Hardeep Singh is chief of the health policy, quality and informatics program at the Center for Innovations in Quality, Effectiveness and Safety, based at the Michael E. DeBakey VA Medical Center in Houston. He also is an associate professor at Baylor College of Medicine. Singh is a nationally recognized expert in electronic health record (EHR)-related patient safety issues, as well as diagnostic errors. We spoke with him about his work and recent findings.

VARQU: You have written that EHRs are essential to improving patient safety. Why is that the case?

Singh: There are several reasons. The first is information availability and accessibility, which is the really big challenge for paper-based records. There has been research that shows missing medical information, which often occurs in paper-based record systems, can cause errors.

The second is that EHRs improve information communication and coordination, so test results can be easily transmitted from one location to another. Clinicians can send messages to consultants and ask for opinions electronically. They can also take advantage of other features, such as clinical decision support and electronic medication-ordering.

One well-known example that illustrates EHRs' power is from about two decades ago, when a patient presented to an intensive care unit with angioedema, a severe allergic reaction. She was allergic to a medication called an ACE inhibitor, used for treating high blood pressure. The patient was discharged and unfortunately given the same medication by another doctor. She then came back to the ICU with the same allergic reaction. EHRs can prevent this—as long as one enters this type of severe allergy electronically, and the EHR has appropriate clinical decision-support features. These features are really helpful for improving patient safety.

Problems with handwriting are overcome by ordering medications electronically. EHRs also enable better measurements, such as providing us with quality-of-care data that we can look at in a much more meaningful way. The data enables us to improve our quality and safety measurements, and measurement is the first step to improvement.

VARQU: One of the EHR-related safety concerns you've studied is the overuse of alerts. Can you provide some background on this work?

Singh: We view the safety of patients and EHRs in three different dimensions. The first dimension is that the technology used by clinicians has to be safe, which means EHRs have to be safe. Many years ago at [Great Britain's] National Health Service, there was a computer glitch in which patients received Viagra instead of Wellbutrin. We don't want to have glitches in which medication names or doses get changed. We need safe EHRs, which means they have to display and communicate information safely. EHRs also have to be available. We can't have long and unexpected downtimes, for instance, disrupting clinical workflow.

The second dimension is that the technology has to be used safely. We can have the best EHR technology in the world, but if it isn't used safely, we can still have patient safety problems. If there are too many alerts in the electronic records system, providers can be overloaded, and they are going to miss critical information. If EHRs are used only partially—with some information on paper and some on the electronic version—information may get lost, not followed up on, or missed.

The third dimension is to use EHRs to improve patient safety, which is what we intended EHRs to do when we implemented them. We want them to measure and monitor patient safety and to prevent patient harm. For instance, we want to develop computer-generated algorithms that could help clinicians predict which patients might be at risk of a problem and require some intervention.

Our work has focused on notification-type alerts sent to providers' inboxes in the electronic records system. These alerts are meant to be "flags" to providers that something abnormal is happening and that they should do something about it. Over time, however, these flags have become ways to notify providers about just about everything.

While I definitely should be notified when a patient of mine has an abnormal chest X-ray or an abnormal lab result that needs to be acted upon, I don't need to be notified about everything. Perhaps some of these notifications could go to somebody else on my care team, such as a nurse or another team member. Too many alerts can lead to problems, such as ignoring them and missing critical information.

Alerts have also been used within the medication ordering process—for instance, in the example I gave about how decision support can help to avoid an allergic reaction. Doctors also receive alerts for drug interactions between drug A and drug B. However, some of these alerts also can be of low value, as when this interaction is very minor. The computer still gives you an alert for that.

The problem occurs when I prescribe 100 medications in one day and get pop-up alerts for 95 of them. Then the alerts become a bit of a nuisance. And researchers have shown, both in and outside VA, that if you give too many pop-up alerts to providers when they are ordering medication, they tend to ignore all of them. As a result, sometimes a clinician might ignore a very important alert.

VARQU: How can we keep providers from getting too many alerts?

Singh: The solutions aren't that simple. We try to use a broad socio-technical approach. We think not only of the technology dimensions of the issue—software, hardware, the way alerts are displayed—but also workflow, other policies, and other organizational factors that really aren't technological.

What's the right balance? We've studied that, and we don't need 23. Only some alerts need to be mandatory. For instance, if an examination shows a nodule in the lung for one of my patients, I need to know that. If a consult got scheduled six months from now in a dermatology clinic, however, I don't need to receive that information today, so that doesn't need to be mandatory.

That's a local policy. It's got nothing to do with technology. So our whole approach should be looking at the technological dimensions and non-technical dimensions to figure out the best optimization.

There are also cultural issues. For instance, there are a lot of FYI types of alerts. You see that in emails too, where people just like to notify you "just because." A similar phenomenon is happening with notifications as well, that people just want to notify you, "I gave your patient a diabetic shoe today." Whether it's worth it for me to be notified is debatable. Unfortunately, people don't agree on the optimal level or types of alerts, so there needs to be standardization.

We should cut down the medication-related pop-up alerts to the most essential ones—drug-drug interactions that need to be acted upon. The problem is that even though a consensus group came up with a list two years ago, this hasn't been widely implemented in electronic record systems, including that of VA. So we're still getting alerts about the interaction between aspirin and Tylenol. I don't need to see that alert, but the computer still gives me one. We need to make some of these redundant alerts go away. It will require more than just technology to do so.

VARQU: Is that something VHA is building into the next generation of EHRs? Are the people working on this project talking to you?

Singh: Not directly, but we do have some good resources that could be useful as VA builds the next generation of EHRs. One big resource I'd like to mention is the Office of the National Coordinator for Health IT's SAFER guides. We developed them with funding from the Department of Health and Human Services. They are designed to help institutions figure out how to do a self-assessment on their EHR systems to determine whether they are being used safely and are safe to use.

There is a lot of advice, guidance, and recommended practices within the nine SAFER guides that would be useful to VHA as they think about the next generation of EHRs. We have a guide on test results and notifications, we have a guide on communication, and we also have guides on things like configurations and interfaces between different parts of EHRs. A lot of this information would be useful, including the guide on organizational responsibilities.

VARQU: Could you tell us more about your work on delayed follow-up on test results, and misdiagnosis.

Singh: One of the areas we are studying is how test results are communicated. We are also looking at misdiagnoses in health care. We are trying to figure out how we can use electronic health records either to detect whether a misdiagnosis has happened, or to prevent it in some fashion.

Currently, we are trying to identify abnormal test results that have not been followed up on. For instance, if someone has an abnormal chest X-ray or an abnormal fecal occult blood test, if that has not been followed up on—for instance, with a CT scan for the chest X-ray, or a colonoscopy for the fecal occult blood test— the computer detects that and generates a list out, and we can then confirm that "oh, yes, that's exactly what happened."

These are "triggers" for us to go look at the medical record. Because otherwise, thousands and thousands of people have tests every day, so how do you identify the needles in the haystack? Our research is trying to make the haystack smaller so that we can easily identify the needles, and find patients who are at risk of not getting follow-up and falling through the cracks of the health care system. We're especially looking at certain types of cancer, because lack of timely cancer diagnosis and missed follow-up are priority issues for VHA to address.

We're also trying to identify how we can use EHRs to flag patients who have had apparent misdiagnoses so we can study their situation to see if there was really a misdiagnosis, and to learn from them. Right now, within the health care system, misdiagnosis is a fairly frequent problem, not just within VHA, but outside as well.

We did a recent study that showed that almost 1 in 20 U.S. patients has had a misdiagnosis. Can the electronic health record help? We think it can. It's going to take some research and lots of effort in order to figure out what we can do. It's not an easy area to investigate and fix. But this is the challenge our lab has undertaken.