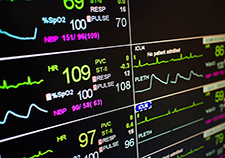 A VA study found only modest added benefits from a telemedicine program that features a telemonitoring center. (Photo: © iStock/Donghero)

A VA study found only modest added benefits from a telemedicine program that features a telemonitoring center. (Photo: © iStock/Donghero)

The system looked at in this study featured a telemonitoring center that was staffed nearly 24/7 with an experienced "intensivist" and two critical care nurses. The center had real-time access to patient vital signs, intravenous infusion rates, and ventilator settings. There were also high-speed video and audio connections between all ICU patient rooms and the monitoring center.

Mortality (death) rates were modestly lower for admissions to the facilities with telemedicine monitoring, both before and after the monitoring program was implemented. However, the implementation of telemedicine was not associated with a significant decline in ICU or in-hospital deaths within 30 days of admission. Nor did the program lead to a reduction in the length of patients' stays in the hospital.

A previous study by a non-VA research team had suggested that ICU telemedicine could help reduce the cost of ICU care, patient mortality, length of stay, and other parameters. The new study appears to show otherwise. In their article, Dr. Nassar and his team analyze various factors that could explain the varying research results, and offer suggestions for optimizing telemedicine in ICUs. (JAMA Internal Medicine, July 2014)