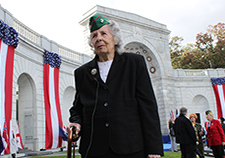 A woman Veteran takes part in the 15th anniversary ceremony at the Women in Military Service to America Memorial in 2012.

A woman Veteran takes part in the 15th anniversary ceremony at the Women in Military Service to America Memorial in 2012.

Researchers with VA's Office of Rural Health and the University of Colorado conducted a first-of-its-kind study of the population demographics and health care needs of female Veterans enrolled in VA care.

They found that women Veterans living in rural and highly rural areas were older and more likely to be married than their urban counterparts. Diagnostic rates were about equal across the groups for several mental health conditions, hypertension, and diabetes. One exception: Non-posttraumatic stress anxiety was significantly lower for highly rural Veterans.

The authors recommended that VA expand its use of telehealth, peer support, and other methods to better reach rural women Veterans, especially for women-specific care and mental health care. (Journal of Rural Health, Spring 2014)