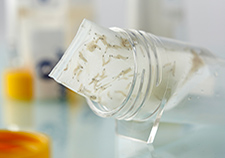 A VA clinical trial on healing diabetic foot wounds is using maggots that come contained in a fine mesh bag. (Photo used with permission of BioMonde)

A VA clinical trial on healing diabetic foot wounds is using maggots that come contained in a fine mesh bag. (Photo used with permission of BioMonde)

Maggot therapy, also known as larval therapy, is a type of biotherapy involving the introduction of live, disinfected maggots (or fly larvae) into the non-healing skin of a person in order to clean out dead tissue within a wound, and to help disinfect it.

Although the healing properties of maggots have been written about since ancient times, the first therapeutic use of maggots is credited to Dr. J.F. Zacharias, a Confederate medical officer. Zacharias reported he had "saved many lives" by using maggots to clean wounds, and that they were "much better than any agents we had at our command for the task."

Dr. William S. Baer conducted additional studies on maggots during World War I, and found that maggots had completely eaten dead tissue from a soldier who had been left on the battlefield for several days with severe wounds—but had left his healthy tissue alone, with no sign of infection.

In 2004, the U.S. Food and Drug Administration granted permission to produce and market maggots for use in humans or animals as a prescription-only medical device for conditions including pressure ulcers, neuropathic foot ulcers, and non-healing traumatic or post-surgical wounds. Now, researchers at the Malcolm Randall VA Medical Center in Gainesville, Fla., are testing how maggots—or larvae, as researchers prefer to call them—compare with standard wound care treatment.

The team's study involves Veterans with chronic diabetic ulcers on their feet. The maggots being used are contained in fine mesh bags, have been sterilized in a laboratory, and are removed after a few days. The researchers will examine how well the wounds heal in each study group, and will also look at maggots' effects on harmful bacteria, which the larvae are known to ingest.

Both groups in the study will receive treatment over the course of eight days. The team will also survey caregivers and clinical providers. Dr. Linda Cowan, lead investigator for the study, said, "One thing we want to find out is whether [the] yuck factor is really an issue. And who is it the greatest issue for? Patients? Clinicians? The wife or husband who has to change the dressing?"

Cowen also told VA Research Currents she hopes to see maggot therapy catch on in the United States as an evidence-based way to treat wounds, including deep skin wounds incurred in combat. She also thinks the therapy may help skin grafts to "take" more frequently, because the larvae eat groups of microorganisms, called biofilms, that form in chronic wounds and elsewhere. "What a win-win that would be," she said.