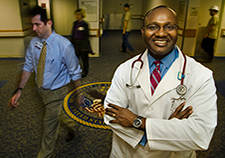 Approximately 6.5 million American adults older than 65 are clinically depressed. The disorder is especially problematic for Veterans, who are from two to five times more likely to exhibit substantial depressive symptoms than their civilian counterparts.

A recent study led by Dr. Leonard Egede of VA's Health Equity and Rural Outreach Innovation Center (HEROIC), in Charleston, S.C., found that talk therapy delivered by two-way video calls are at least as effective, if not more so, than in-person treatment delivery for older Veterans with depression. The study was published in the August 2015 issue of Lancet Psychiatry.

The researchers recruited 241 Veterans aged 58 or older with major depressive disorder from the Charleston VA Medical Center and four associated CBOCs. The Veterans were randomly assigned to either telemedicine or same-room psychotherapy, and received identical treatment: behavioral activation, which is an approach that emphasizes reinforcing positive behaviors.

The study team measured the participants' progress using two standard questionnaires in which patients rated their own symptoms. Participants were considered to be responding to treatment if their symptoms were reduced by at least half.

The team found that telemedicine-delivered psychotherapy produced similar outcomes to in-person treatment delivery. After a year of treatment, 39 percent of telemedicine patients and 46 percent of in-person therapy patients were no longer depressed, according to structured clinical interviews.

"Psychotherapy works for depression whether you deliver it by face-to-face or the telemedicine approach," Egede told Reuters Health in an interview. Telemedicine, he said, is a good option for "older adults who have barriers to mobility, stigma, or geographic isolation."

"At our facility,"he continued, "we have almost 40 percent of people who live in rural areas, so this is a good opportunity to be able to provide care for them without [their] having to drive long distances."