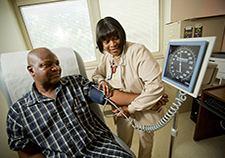 Many studies have shown that in the American population, blacks have worse health outcomes than whites in most categories, except for kidney disease. Among the possible contributing factors that are usually cited are their lower socio-economic status and reduced access to care.

A team of VA researchers, led by Dr. Csaba P. Kovesdy of the Memphis VA Medical Center, recently published a study in the journal Circulation suggesting that if all patients get the same care, not only do these health differences disappear, but blacks fare better than whites, at least with respect to a few important health care outcomes.

The team looked at the mortality rates of more than 2.5 million white Veterans and more than 547,000 blacks through VA's electronic health record system. They found that the annual mortality rate of white males was about 32 per 1,000, versus about 23 per 1,000 for black men. Most of the patients in the studies were men, with an average age of 60 years.

Blacks were also 38 percent less likely than whites to develop heart disease, the leading cause of death in the U.S. "Our findings suggest that a health care system without barriers to access, like the VA system, could dramatically improve health outcomes in minorities," Kovesdy told CBS News.

To help explain their findings, the authors suggested that blacks may have certain genetic characteristics that actually make them healthier than whites in some ways. In an editorial accompanying the study, two researchers from the National Institutes of Health (NIH) suggested that other factors also need to be considered to understand the findings, such as the possibility that blacks in the VA system may have better overall health than their race peers in the general population.