Lack of internet access can impede efforts to quit smoking 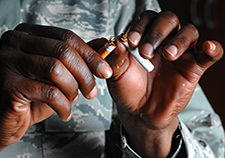 Populations that tend to have poorer internet access—including minority and low-income Vets—could be hindered in their efforts to quit smoking, suggests VA research. (Photo by Senior Airman Anthony Sanchelli/USAF)

Populations that tend to have poorer internet access—including minority and low-income Vets—could be hindered in their efforts to quit smoking, suggests VA research. (Photo by Senior Airman Anthony Sanchelli/USAF)

Quitting smoking isn't easy, but according to VA's Office of Public Health, more than half of all adults who ever smoked have quit. Researchers have shown that people have the best chance of quitting for good when they use smoking cessation medication approved by the Food and Drug Administration, and take part in tobacco cessation counseling.

VA offers Veterans ready to quit using tobacco both medication and counseling. Many of the counseling services VA offers are internet-based, including "Stay Quit Coach," a mobile app designed to help Veterans with posttraumatic stress disorder to quit. And VA's "Smokefree Vet" mobile site, a collaboration with the National Cancer Institute, allows Veterans to track their progress toward quitting and to get daily support, advice, and encouragement on their mobile phones.

Successful use of these counseling services and others requires access to the internet. A recent study by the VA Mid-Atlantic Region Mental Illness Research, Education, and Clinical Center and the VA Center for Health Services Research in Primary Care, both based in Durham, North Carolina, explored this issue.

The team looked at 408 Veterans who had been recruited and enrolled in a smoking cessation trial. They found that while 82 percent of them had access to the internet at home, those Veterans who were African-American, older, and not married were significantly less likely to have home internet access.

According to the researchers, these results highlight gaps in internet access among some groups of Veterans. They point to the need to improve access to web-based health interventions for low-income, minority, and socially disadvantaged Veterans.