Deaths and complications from surgery decline at VA facilities 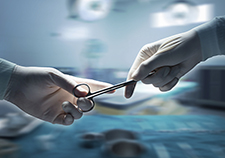 Patients who had major complications as a result of surgery at VA hospitals dropped from 10 percent to 7 percent from 1999 through 2014, according to a report on a VA study appearing on FOX News and other media outlets.

The study, posted online Sept. 21, 2016, inJAMA Surgery, examined data on more than 700,000 Veterans who had had inpatient surgery or operations for vascular, spinal, orthopedic, neurological, thoracic, genital or urinary issues. Cardiac surgeries were excluded from the analysis.

The research was conducted by researchers with the Michael E. DeBakey VA Medical Center in Houston and Baylor College of Medicine. They also found that among patients who did have major complications, the proportion who died as a result declined from 24 percent to 15 percent.

FOX News quoted lead author Dr. Nader Massarweh as saying that "our data in many ways mirror trends that we find in the private sector as well. Some of what we are seeing is probably the end result of underlying trends that have been occurring over time across all of health care, relating to our ability to provide better care."