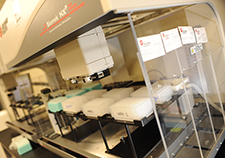 This automated liquid-handling workstation is part of a state-of-the-art lab and biorepository serving VA's Million Veteran Program, which has been featured in several media outlets. (Photo by Frank Curran)

This automated liquid-handling workstation is part of a state-of-the-art lab and biorepository serving VA's Million Veteran Program, which has been featured in several media outlets. (Photo by Frank Curran)

VA's Million Veteran (MVP) Program, launched in 2011 to foster genomic discoveries and position VA in the forefront of personalized medicine, was featured in an article published in The Week news magazine Sept. 25.

Reporter Carl Zimmer toured the repository for blood samples donated by Veterans located at the Jamaica Plain Campus of the VA Boston Healthcare System. He described a long, dimly-lit corridor, flanked on either side by 16 separate compartments cooled to as low as 80 degrees below zero Celsius, with a robot located inside the freezer ferrying vials of blood to their assigned compartment.

He quoted Dr. Michael Gaziano, one of MVP's principal investigators, as saying: "We're working in a space where no one has ever worked before on this scale. If the project develops as planned, it could fuel discoveries for years to come, leading to new medical treatments not just for Veterans, but for all patients."

MVP's aim, described in the article, is to build one of the world's largest databases of genetic, military exposure, lifestyle, and health information. With more than 512,000 Veterans as of mid-October 2016, MVP has already achieved this. The effort seeks to eventually reach an enrollment of 1 million.

Zimmer explained how the blood samples, which contain DNA material, are stored anonymously for future research. DNA, or deoxyribonucleic acid, is a self-replicating material present in nearly all living organisms. It is the carrier of genetic information.

Veterans who volunteer to be part of the program are asked to fill out surveys about their health and health-related behaviors, and to complete an optional health assessment. They are also asked permission to allow VA researchers to confidentially access information from their medical records, and to allow VA researchers to contact them in the future.

The article in The Week was excerpted from a previous article by the author that appeared in Stat News Nov. 11, 2015. That article included a video demonstrating how the vials of blood were safely handled, from loading dock to the blood bank repository. It also described, in significant detail, how VA protects the privacy of Veterans participating in the program, and favorably compared the rate of Veterans signing up for the program with that of a similar program conducted by Great Britain's National Health Service.