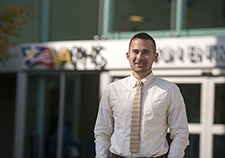 Dr. John R. Blosnich is a research health scientist with the Center for Health Equity Research and Promotion at the VA Pittsburgh Health Care System, and an adjunct assistant professor in the department of behavioral and community health sciences at the University of Pittsburgh Graduate School of Public Health. He earned his Ph.D. in public health sciences in 2011 from West Virginia University and completed a postdoctoral fellowship in suicide prevention at the University of Rochester, where he began his VA research in collaboration with the VISN 2 Center of Excellence for Suicide Prevention. His research areas of expertise include interpersonal and self-directed violence among lesbian, gay, bisexual, and transgender (LGBT) people. Blosnich's health equity research in VA focuses on LGBT Veterans, with specific attention to suicide risk.


VARQU: What types of health care inequalities are you finding among LGBT Veterans?
Blosnich: My research is not yet looking at health care utilization. Currently, we are trying to get an accurate picture of the basic health disparities for LGBT Veterans, but we only have the "T" part. This is because we don't have any way for Veterans to give us standardized information about their sexual orientation or gender identity. I worked with a team of VA researchers to develop a way to identify a subset of transgender Veterans.

So my work is mainly focused on transgender Veterans. The way we have been able to use a proxy measure to find transgender Veterans is by using the ICD-9 diagnosis code for gender identity disorder [GID]. [Note: ICD stands for International Classification of Disease.]

It's a very imperfect way of finding transgender people, but it's the best we have so far until we can get an actual gender identity field where patients can disclose their identity if they want to. Self-reported sexual orientation and gender identity is really the gold standard we need in order to do this research. 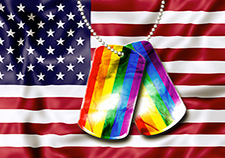 Much of Dr. John Blosnich's research has focused on understanding the health needs of lesbian, gay, bisexual, and transgender Veterans. (Photo: ©iStock/bennymarty)

Much of Dr. John Blosnich's research has focused on understanding the health needs of lesbian, gay, bisexual, and transgender Veterans. (Photo: ©iStock/bennymarty)

What are you learning about transgender Veterans?
My findings in suicide risk have indicated that the risk is remarkably high for trans Veterans—it's very, very high. It's not only high when you look at suicidal ideation and suicide attempts, but when we did a study looking at suicide mortality, we found that death by suicide was also very high for transgender Veterans.

We do know that over the past few years, there's been a steady increase of transgender Veterans coming into VA. That work was spearheaded by Dr. Michael Kauth at the Michael E. DeBakey VA Medical Center in Houston, and I helped with the study. We looked at the number of GID diagnosis codes and found that they were going up in VA, which is heartening in that it seems to suggest more trans Veterans were coming to VA for care.

What we don't necessarily know is what kind of care they are getting once they come in for care; what they think about that care; and how it compares with nontransgender Veterans' care. We're just not sure about that at this point.

Are there recommendations you would make to clinicians regarding care for transgender Veterans?
Definitely. VA's LGBT program, which is headed by Dr. Kauth and Dr. Jillian Shipherd, is part of VA's Office of Patient Care Services and has a SharePoint site for VA clinicians to use, with a number of training modules around how providers can deliver high-quality, respectful care to transgender Veterans. On the site, there's everything from how to handle the initial introduction to mental health care, cross-sex hormone therapy assessment, and prescribing hormones—there are so many things providers can learn.

I think that at the end of the day, providers should first of all know the resources that are available in the system—but second, they should know that transgender Veterans are people, just like any other patients. One of the biggest questions that tends to come up is "what if I say the wrong name," or "what if I use the wrong pronoun?" I tell people it's not unlike if you forget someone's name and have to ask them for it, or if you call someone by the wrong name. You apologize and move forward.

Is there anything being done to identify the subset of LGB Veterans?
Blosnich: If VA turns out to be like the general population, there will be more LGB-identified people than there are transgender-identified people, just because of the nature of the population. However, there aren't currently, to my knowledge, any systematic efforts to introduce a field in the medical record for sexual orientation. Nor are researchers using some other way to try to find LGB indicators in the medical record.

There's been some discussion among researchers about using natural language processing for text fields, to see if there might be some sort of information in the text notes in medical records, but it would be a very large undertaking for a really nonspecific way of finding LGB people. At the end of the day, it would produce a vast underestimate of the population.

It's very hard to determine LGBT inequalities in terms of VA administrative data and health care record data. There are some survey studies that have included sexual orientation, but that information would just give us what the Veteran reported in the survey. We have no way to link that information to administrative data. So to the extent that that sampling is representative, we may get an estimate—but a lot of these surveys are very specific to either Vietnam-era Veterans, or Iraq and Afghanistan Veterans, not of the general VHA population that includes all theatres of service.


Do any of your studies involve the entire group of LGBT Veterans?
Currently my studies are limited to transgender Veterans. Some of my earlier work looking at LGB Veterans used federal health survey data. A federal survey like the Behavioral Risk Factor Surveillance System has information about sexual orientation and also asks about military service, so there were ways we could compare LGB Veterans with heterosexual, or straight, Veterans.

Those studies, of course, produced very small sample sizes, because Veterans are only about 10 percent of the U.S. population, and then within that 10 percent, only about 2 to 3 percent might identify as LGB. The sample gets very, very small very, very quickly!

We had some findings we expected would be similar to the general population, such as that smoking and mental distress were more common among LGB Veterans than among heterosexual Veterans. What we found in the medical record with transgender Veterans is that they generally show a lot of health disparities for a lot of different conditions, like HIV and depression, not unlike what we have seen in non-Veteran trans survey research.


What are you working on now and in the immediate future?
Right now, I'm in the midst of my HSR&D Career Development award, which focuses on my transgender health services research at VA. We are working on questions of utilization and patient experiences. We want to examine what happens once a transgender Veteran gets the first diagnosis of GID at VA. What does their pattern of care look like over time? And how does that differ from someone who does not have GID?

After we look at utilization outcomes and quality metrics, the last aim of my study is to begin recruiting transgender Veterans for us to talk with in semi-structured interviews to get their perspectives about care in VA. What are their experiences? What do they think about what works in the system, and what can be improved? We also are going to interview VA providers who treat transgender patients and get their perspectives on what works in the system for them, what we can improve on their behalf, and what they need to be able to provide high-quality care for transgender Veterans.


Any final thoughts on the future of LGBT research within VA?
The Office of Management and Budget convened a federal interagency working group on measuring sexual orientation and gender identity. VA participated in that, along with a lot of other federal agencies. The group summarized what the field knows about sexual orientation and gender identity and how it's measured—and the official report conveyed that the government is interested in including these measures so that we can get past the point of documenting disparities and to thinking about interventions to reduce these disparities.

It's good that these things are moving forward. It's really difficult for health equity research for LGBT populations to move forward without being able to identify the population. For a lot of other minority groups in VA, we've gone past the point of identifying disparities—we're actually beginning to address them through interventions. For LGBT people we can't do that. We haven't fully documented their disparities because we can't identify them, and we can't develop and test interventions for them because we can't find them.

We need LGBT Veterans' input into what this should look like, and we also need to be able to recruit them to test and implement interventions. Without the key step of asking questions and collecting data on sexual orientation and gender identity, the other steps of health equity research just can't be taken.

If we're going to put these questions out there, we've got to develop them, and part of that development includes getting input from multiple stakeholders, including actual LGBT Veterans; providers; front-line staff; and even the people who would program this information into the medical record, so that we could determine what the information would look like on an input screen.

It's very interesting how people think about sexual orientation and identity generally. They worry that asking questions will anger people. They think, "they won't answer them, so why should we ask them anyway?" There's a lot of evidence showing that's not the case. People will answer, and they will understand why the questions are asked. It should be a core demographic field for people to answer.

In survey research we always ask about household income: it's just seen as a standard demographic question. Every single time, without fail, household income is the item that people are most likely to refuse to answer. But we still ask it. People are more likely to complete sexual orientation and gender identity questions than income questions, but there are still a lot of false barriers and beliefs around using these questions in surveys. I hope that the preponderance of evidence will help to sway decision-makers and policymakers to see that this is really important, and it's doable.