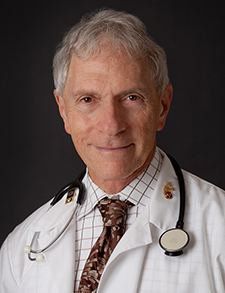 Estrogens are hormones that are important for sexual and reproductive development and fertility, especially in women.

In the body, estrogen binds to two proteins, called estrogen receptor alpha (ERα) and estrogen receptor beta (ERβ). Studies have shown that ERβ is largely responsible for the protection estrogen provides to the heart. When estrogen binds to ERβ in a cell, it triggers a series of biochemical events that protect the heart from a variety of insults. In blood vessels, both ERα and ERβ play important roles in protecting against diseases such as arteriosclerosis—the main cause of heart attacks—and other damage to the vessels.

Dr. Ellis Levin, a clinician scientist at the VA Long Beach Health Care System, and his colleagues published a study in the Oct. 15, 2016, issue of Molecular and Cell Endocrinology that showed the ability of ERÎ’ to neutralize a hormone called angiotensin II, a known cause of high blood pressure and heart damage.

In addressing why the new compound may be significant clinically, Ellis explains that previous synthetic estrogen compounds offered benefits to those receiving them—but also brought unwanted side effects. "While estrogen binds to both receptors and has many, many beneficial effects," Levin says, "the problem is that it binds to ERα in the breast and uterus, thereby promoting cancer in both organs. That's why women don't want to take estrogen after menopause," when natural production of estrogen declines significantly.

By using the synthetic estrogen compound that only binds with ERβ, "we don't have to worry about ERα. So there will hopefully be no problem for women to take this."

"This is a precision targeting of one receptor and not the other," he continues. "We can now do precision hormone replacement."

According to Levin, estrogen is also vital to preserving overall health. 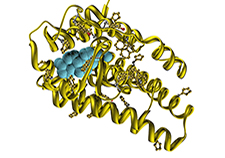 "Estrogen preserves the healthy systems in our body, unless we have genetic predispositions or lifestyle issues that overcome the fundamental function of our bodies to keep things healthy," he explains.

Men, too, produce estrogen. Studies show that in both sexes the hormone protects the brain and cardiovascular system, and promotes bone health. Estrogen also protects both men and women from developing too much fat, unless they follow a particularly unhealthy diet and fail to exercise.

Next steps for Levin's group include testing the new compound in male mouse models, and better understanding its pharmacokinetics—how it's absorbed, how long it lasts, and how it gets into the body's tissues. "Then we can go into clinical trials," says Levin, "assuming we can get the money to do that."

In clinical trials, Levin would like to initially target people who have early cardiovascular disease. "It's exciting that this may be a novel approach to treating high blood pressure, and may substantially prevent all the downstream issues like heart enlargement, heart stiffening, and ultimately heart failure. It's acting on both the blood vessels and the heart, which is the ideal situation."