Melissa M. Garrido, Ph.D., is a health services researcher and health economist with the Geriatric Research Education and Clinical Center (GRECC) at the James J. Peters VA Medical Center in the Bronx, New York, and with the Partnered Evidence-Based Policy Resource Center (PEPReC) in Boston, Massachusetts. In addition, she is an associate professor of geriatrics and palliative medicine at the Icahn School of Medicine at Mt. Sinai in New York City.

Garrido is the recipient of a Career Development award from the VA Office of Research and Development to help her examine the quality of mental health care provided to Veterans with serious physical illnesses, such as advanced cancer or congestive heart failure. The goals of her research award are threefold: 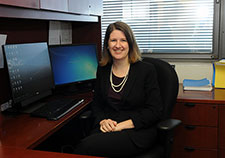 Dr. Melissa M. Garrido is a VA investigator at the Geriatric Research Education and Clinical Center in the Bronx, New York. She is studying mental health care in seriously ill Veterans. (Photo by Yang Zhao)

Dr. Melissa M. Garrido is a VA investigator at the Geriatric Research Education and Clinical Center in the Bronx, New York. She is studying mental health care in seriously ill Veterans. (Photo by Yang Zhao)

VARQU spoke with Garrido about the work she is doing to improve palliative care for seriously ill Veterans.

Welcome Dr. Garrido. Can you tell us why you chose to study mental health care needs in seriously ill Veterans?

I chose this line of investigation for my CDA because there is a high prevalence of comorbid mental illness and serious physical illness among Veterans. There's really not a lot of evidence to guide care for psychological distress and mental illness at the end of life.

The VA has placed a high priority on coordinating physical and mental health care. I think this coordination is especially important in the context of serious physical illnesses. There are unique psychosocial issues resulting both from these diagnoses as well as concern over the impact of both depression and anxiety on physical health status and on care use.

Sometimes there's a tendency to think that depression and anxiety are normal if you have a life-limiting illness, but they are not normal consequences—they have effective treatments. It's important to figure out the best way to address these issues in seriously ill patients.

Also, a range of providers, from social workers to the National Cancer Policy Board, have called for the development and use of evidence-based guidelines and algorithms to identify who should receive what types of mental health care near the end of life.

Can you give us a brief definition of palliative care? What does that involve?

Palliative care is team-based care that focuses on symptom management, facilitation of transitions of care across settings—for instance ensuring that there are services at home that are set up after a patient has been discharged from the hospital. It also includes eliciting and communicating goals of care. One way to think of it is as an extra layer of support. So it is addressing the needs of the whole patient and their family while the patient is undergoing those other disease-targeted treatments.

So palliative care is not synonymous with hospice care, correct?

What do you mean by the term life-limiting illness? Does this require end-of-life care?

It's a bit broader than end-of-life care, but what I mean is serious physical illness that limits a patient's life expectancy. So these are patients for whom a provider may say no when asked "Would you be surprised if this patient were to pass away in the next year?" So it is not the imminent end of life, but it's near the end of life. Some of these patients might improve, but it’s a broad term that encompasses things like metastatic cancer, advanced heart failure, or chronic obstructive pulmonary disease, or maybe AIDS with comorbidities such as cirrhosis or cancer.

How do anxiety and depression affect chronic physical illness? Do they go hand-in-hand with a serious, life-limiting illness?

I think what's important to note is that there will always be some concern about a serious illness; that's entirely normal. But clinical levels of mood disorders should not be expected for all patients. So this becomes a case where stress is interfering with daily life and affecting a patient's ability to do anything else.

Anxiety and depression are associated with symptom exacerbation, poor pain control, reduced quality of life, and also, poor treatment adherence. There's a reciprocal relationship between pain and depression. Worse pain can precipitate depression, but if a person has depression they may also report worse pain. The same happens with anxiety. Patients with anxiety might report more pain. There are other symptoms such as dyspnea, or shortness of breath, that can lead to greater anxiety.

I think one type of anxiety, PTSD, really deserves special attention—especially in the VA. Serious illness symptoms, such as shortness of breath, can remind patients of experiences that they endured in the military, and might actually reactivate PTSD. The highest demand right now for PTSD care in the VA is from Vietnam Veterans. And their risk of serious illness will increase with age. It's important to note that sometimes patients don't experience many symptoms until they are informed of a terminal prognosis. PTSD symptoms might include things like paranoia, hallucination-like episodes, or confrontational behavior. But in a life-limiting illness, these symptoms might be misdiagnosed and treated as delirium.

PTSD coping mechanisms also include avoidance. So this might lead a patient to ignore physical symptoms or try to avoid contact with clinicians or family caregivers, which might make their physical illness/situation worse.

Can you tell us what the goals of your study are? What are some of the things you hope to find out?

Can you tell us how you structured your study?

We took a national sample—we are using existing data from the VA, data from the medical record that has been compiled into national data sets. We are looking at data from hospitalizations for Veterans who had diagnoses of advanced cancer, heart failure, or chronic obstructive pulmonary disease (COPD), who had a history of being hospitalized a couple of times in the past year, or had at least one ICU admission in the past year.

The idea was to look at that single hospitalization, at that single snapshot, and explore what information we could see about the Veteran that would predict his cost of care or likelihood of ICU admission. We were looking at current diagnoses of mental illnesses, history of mental illnesses, comorbid physical illness burden, socio-demographic characteristics, and then types of mental health treatment that patients have received.

What would be a future line of investigation?

Given that we are not finding the hypothesized relationships that we had expected, which was surprising, we are wondering—given that mental illnesses are not always recorded in the medical record—if we might need more sensitive measures to identify which patients need additional mental health care or need additional palliative care.

Using existing data to improve the provision of care for Veterans is part of the VA's whole learning health-care system initiative. There's this wealth of information in the medical record, but we need to figure out the best ways to use it to ensure that the VA is providing high-quality, high-value care.

When we've looked at chart review data, looking at the actual medical records in a much smaller local sample of Veterans, we did identify potential areas of improvement for mental health care. There was a disconnect between reports of psychological distress and documented receipt of mental health care.

But we are not seeing these relationships in the large administrative datasets with the current measures that we have. So this might be an opportunity to use something like natural language processing to try and get at more of the nuanced data that is in the text of a medical record, that's not in the administrative files.

Is there anything else you'd like to add about the direction of your research?

A lot of Veterans prefer to seek psychological support from chaplains rather than psychologists, because chaplaincy has a large role in the military. Chaplains are frequently assigned to commands and they are held to strict confidentiality standards, stricter than those for psychologists. So, it may make them a less stigmatizing source for emotional support. I think a more systematic investigation into what exactly chaplains are doing for different patients, and what elements of that care are the most effective in improving distress and end-of-life care quality, would be an interesting and important next step.