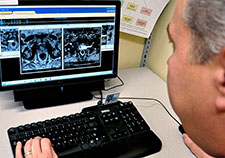 Dr. Ted Skolarus is a urologic oncologist—a physician who treats cancer of the urinary tract and male reproductive system. He serves as section chief of urology at VA Ann Arbor Health Care System in Michigan, and is an associate professor of urology at the University of Michigan. He is also a research scientist at the VA Health Services Research & Development Center for Clinical Management Research (CCMR) in Ann Arbor.

His research is focused on survivorship care for men who have undergone treatment for prostate cancer. While survivors need to be monitored by their providers for cancer recurrence, there are also a number of quality-of-life issues, like urinary incontinence and sexual health, that should be assessed by the medical team. In many cases, there are things that can be done to help survivors enjoy a better quality of life.

VARQU spoke with Skolarus about his Career Development Award to help improve the quality of survivorship care for Veterans who have been treated for prostate cancer. He attributed the success of this research program and future efforts to the mentorship and holistic support made available through the award.

Welcome, Dr. Skolarus. How prevalent is prostate cancer in the U.S.?

There have been changes in the screening recommendations from various organizations, as to the value and effectiveness of early detection of prostate cancer through prostate-specific antigen (PSA) screening. But in general, most approaches rely on shared decision making—between providers and patients—regarding whether men wish to be screened for prostate cancer. 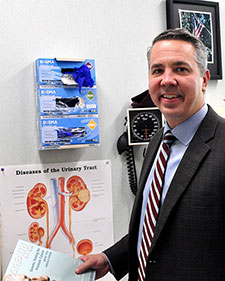 There are some high-risk groups—including men who were exposed to Agent Orange, African American men, men with a strong family history of prostate cancer, or early onset prostate cancer in a relative—that may be at greater risk of aggressive prostate cancer, that should more strongly consider screening.

What is the survival rate for prostate cancer?

The five-year survival rate for localized prostate cancer is nearly 100 percent. On the other hand, prostate cancer is one of the leading causes of male cancer-related deaths—there are nearly 30,000 deaths expected in 2018. There are over 3 million men alive with a diagnosis of prostate cancer in the United States. Given the patient population and access to health care and screening in the VHA, thousands of these prostate cancer survivors are cared for in the system.

What are the most common side effects of treatment for prostate cancer?

I tend to think of side effects as impacting biological and psycho-social aspects of men and their partners' lives. When we think of biological side effects of prostate cancer treatment, we think of four primary areas or domains. One is urinary health: The prostate sits at the base of the bladder. The urethra goes right through the prostate and allows the urine to exit the body. When you treat the prostate either through surgical removal or by radiation therapy, there are urinary side effects. Those can include urinary leakage, and other urine symptoms like urgency or frequency. Those can be long term, or appear years later after treatment.

The other side effect of prostate cancer treatment that impacts a lot of men and their partners is related to sexual health. The nerves that go to the penis for erectile function are draped right onto the prostate gland. So, any treatment that we do locally can impact sexual function—that is a common side effect. There are biological ways to help with erectile dysfunction, and there are also psycho-social treatments to help men and their partners deal with those side effects.

Another treatment that impacts men more globally is hormone therapy, or androgen deprivation therapy (ADT), which can be used along with radiation therapy to treat localized prostate cancer, or by itself to treat cancer that has spread. Side effects associated with castration, or lowering the man's testosterone levels to a minimal level, can include hot flashes, fatigue, weight gain, breast enlargement, and decreased libido. It can also include broader side effects such as cardiovascular disease, osteoporosis, and diabetes.

Can you explain what your Career Development Award involved?

As we looked at a couple different markers of survivorship care quality, we found a lot of variation within the VA health care system. One of the first things that we did was look at men who were getting ADT, and if they were getting a recommended bone density testing to screen for baseline osteoporosis. We know that this is recommended for most men who will be starting hormone therapy.

We found that up to 1 in 5 men were getting this screening study. This was fairly consistent with findings from Medicare studies. But we also found that the more likely you were to get a bone density test, the more likely you were to be diagnosed with osteoporosis. And, if you were diagnosed with osteoporosis, you were more likely to get vitamin D, calcium, and treatment for osteoporosis, in an attempt to prevent fracture given increased risks with ADT. So, this part of the study pointed out areas for improvement in bone health for men who were getting hormone therapy.

Why is bone density testing important for a man who will undergo hormone therapy for prostate cancer?

In general, men are less likely to undergo osteoporosis screening, although they may suffer from low vitamin D levels, smoking, and other risk factors for osteoporosis. These are things that are prevalent among Veterans.

What types of follow-up care are important for prostate cancer survivors? You mentioned bone density scanning; what else do physicians look for?

We recommend—as part of the American Cancer Society prostate cancer survivorship guidelines—measuring and addressing men's quality of life, with respect to urinary, sexual, bowel, and overall health. That is important to do given the side effects of treatment, yet there remains a lack of systematic organizational approaches for assessment. Following PSA as a cancer surveillance approach is also important.

Another part of the work we did as part of this Career Development Award was to look at prostate cancer surveillance rates with PSA. We found very high levels of annual surveillance among Veterans in the VA health care system. However, we also found something that is an area of possible improvement.

We discovered that when the PSA level approaches 4—which is typically the level associated with screening and early detection of prostate cancer—men were more likely to get annual surveillance, even though they had already been treated for prostate cancer. So, in other words, the levels we use for prostate cancer surveillance after treatment, such as less than 0.2 after surgery, were not necessarily being adhered to system-wide.

I think engaging and using clear communication about survivorship care plans with primary care providers who end up caring for prostate cancer survivors can really make a difference. Good communication is especially helpful in getting men back to their specialists if there is concern for a recurrence of their prostate cancer or unmet needs with respect to side effects.

You said that you felt there was a benefit to men who were treated in the VA health care system. How is that different from getting care outside in the community?

I think that one incredible resource within the VA is its integrated health record, or CPRS. Several years ago, I did a study looking at fragmentation in prostate cancer survivorship care. I found that the more fragmented your care was between different providers, the more likely you were to have care that is more expensive and of lower value—for instance, repetitive PSA testing.

It would be very unusual for the specialist or primary care provider not to see what the last PSA test was in a patient treated in the VA health care system. So that integrated record and laboratory data can really help the providers understand where survivorship care issues are on the radar.

For example, is urinary incontinence being addressed, or what is the status of sexual health among prostate cancer survivors? What medications are they taking? The national electronic systems in place at the VA present a unique opportunity to understand the entire context of the patient's health care within the context of other conditions that they may be dealing with through their primary care providers and other specialists.

You also developed an intervention for prostate cancer survivors that used automated telephone calls with advice on symptom management. Can you explain?

As part of the Career Development Award, I was able to have multiple survivorship-related projects dovetail with each other. One of those was an HSR&D-supported randomized trial of over 500 men with prostate cancer across four sites in the VA: St. Louis, Cleveland, Ann Arbor, and Pittsburgh. Along with Dr. Sarah Hawley who led the project, we wanted to understand if we could use an automated telephone system to not only assess men's side effects within those important domains, but also to give tailored newsletters and feedback on how they can help themselves self-manage those side effects. We also wanted to teach men when to reach out to their doctors to help them with side effects that might be overlooked during routine care.

That work was presented at the American Society of Clinical Oncology's annual meeting, and highlighted during one of its poster discussion sessions, this year. The manuscript is under peer-review.

What we found was while there were small effects on men's overall quality of life, when they did want to focus on a given area like urinary or sexual health, we saw improvements in that area. That demonstrates the potential impact of not only measuring patient-reported outcomes for prostate cancer across the entire VA system, but also giving Veteran prostate cancer survivors tailored self-management strategies to improve those areas that are affecting their health. This degree of support is not available in any other system. We are excited about its potential for national impact, as Veteran engagement was excellent throughout the study.