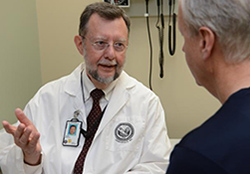 A VA cooperative study on Vitamin E for Alzheimer' disease made headlines worldwide on the last calendar of 2013, with print and broadcast stories produced by United Press International, the Associated Press, and dozens of major print and broadcast news outlets around the globe. The study found that vitamin E, known for its antioxidant power, helped slow brain decline among older people with mild to moderate Alzheimer' disease. The study involved 613 Veterans at 14 VA medical centers and was led by Maurice Dysken, MD, of the Minneapolis VA Health Care System.

VA research instrumental in development of new guidelines for cholesterol-lowering medicines —Research conducted by several VA investigators was instrumental in the development of new guidelines to help providers determine when and whether to prescribe cholesterol-lowering medications for their patients. Among the news outlets covering this story were CNN, The New York Times, and Time magazine. Instead of basing prescriptions on a patient' low-density lipoprotein (LDL) level—the "bad" cholesterol that can lead to heart attack and stroke—new guidelines suggest that providers calculate their patients' risk of having a heart attack in the next 10 years based on factors including age, cholesterol levels, blood pressure and blood pressure medication use, diabetes status, and smoking status. Rodney Hayward, MD; Timothy P. Hofer, MD, MSc; and Sandeep Vijan, MD, all of the VA Ann Arbor Center of Excellence for Clinical Management Research, are among the VA researchers who have published scholarly articles advocating this approach. 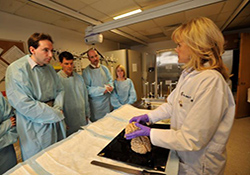 Ann McKee, MD, of the VA Center for the Study of Traumatic Encephalopathy Brain Bank in Bedford, Mass., was cited in an article appearing in newspapers throughout Wisconsin for her work in examining the brains of dozens of former National Football League players, and finding signs of a degenerative brain disease in athletes with a history of concussions. In her studies of athletes, Veterans, and others, she has found a link between multiple blows to the head and chronic traumatic encephalopathy (CTE). CTE is associated with memory loss, confusion, impaired judgment, paranoia, impulse control problems, aggression, and progressive dementia. 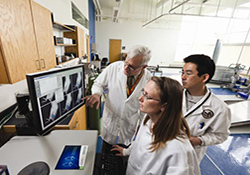 The West Haven (Conn.) VA Medical Center held an all-day conference on Oct. 30, 2013, to mark the 25th anniversary of the founding of the Center for Neuroscience and Regeneration Research. The center is a collaboration among VA, Yale University, and the Paralyzed Veterans of America. According to the New Haven Register , the center' staff counts among their accomplishments the first demonstration of cell transplantation to enhance nerve impulse conduction in an injured spinal cord; the first demonstration that bone marrow stem cells, introduced intravenously, can protect an injured brain and spinal cord; and the first human study of transplanting myelin-forming cells, which act as insulation around spinal cord nerves.

Rachel Yehuda, PhD , director of the PTSD Clinical Research Program and the Neurochemistry and Neuroendocrinology Laboratory at the James J. Peters VA Medical Center in the Bronx, New York, was featured in an article on PTSD in the July 14, 2013, edition of the New York Daily News. Yehuda was quoted as saying that "more than half of all people in the United States are exposed to the kind of event that can give you PTSD," and offered tips for people who believe they may have developed the illness, including advice to consult the website of VA' National Center for PTSD (www.ptsd.va.gov).

Hardeep Singh, MD, MPH, and Mark Graber, MD , were featured in a Nov. 17 Wall Street Journal article on innovative strategies to avoid misdiagnosis. The article included information on a study led by Singh that suggested that computer reviews of electronic medical records could provide a "second set of eyes" that could help physicians better evaluate and treat prostate and colorectal cancers. Graber was quoted as saying that "diagnostic error is probably the biggest patient safety issue we face in health care, and it is finally getting on the radar of the patient quality and safety movement." Singh is the chief of the Health Policy, Quality and Informatics Program for the Center for Innovations In Quality, Effectiveness and Safety at the Michael E. DeBakey VA Medical Center in Houston, Texas, and Graber is chief of the medical service at the Northport (N.Y.) VA Medical Center.