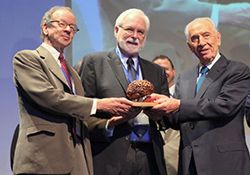 A team of VA and Brown University researchers won a $1 million prize for their work in developing a brain-computer interface that could help restore independence for people with severe paralysis. The prize was offered by the Moshe Mirilashvili Memorial fund, and was presented by Israeli President Shimon Peres in Tel Aviv in October 2013. The prize is awarded for a recent breakthrough in the field of brain technology. The investigational brain-computer interface that received the award, called BrainGate, uses a small device about the size of an aspirin with an array of 1,000 tiny microelectrodes that is implanted in the brain to pick up brain signals and enable the user to control a robotic arm or other assistive device using only his or her thoughts.

Michael L. Boninger, MD, co-director of the Rehabilitation Research and Development (RR&D) Center of Excellence Human Engineering Research Laboratories at the Pittsburgh VA Medical Center, and John P. Donoghue, PhD, director of the Center for Neurorestoration and Neurotechnology at the Providence VA medical center (see the BrainGate article above for more about his work), were welcomed to membership in the Institute of Medicine (IOM) at the Institute's October 2013 meeting. Membership in IOM is based on distinguished professional achievement in a field related to medicine and health; demonstrated and continued involvement with the issues of health care, prevention of disease, education, or research; skills and resources likely to contribute to the Institute's tasks of assessing current knowledge, conducting studies, and considering policy issues; and willingness to be an active participant in the institute.

Stephen G. Waxman, MD, PhD, director of VA RR&D's Center of Excellence on Restoration of Nervous System Function at the West Haven VA Medical Center, received an award for the most important clinical/translational contribution to the field of neurology of the year at the October 2013 meeting of the American Neurological Association. Waxman received the award for his article published in the January 2012 issue of Annals of Neurology titled "Gain of Function NaV1.7 mutations in idiopathic small fiber neurology." Idiopathic small fiber neuropathy is a relatively common pain condition that develops in adulthood, and Waxman's team showed that a mutation on a gene provided an explanation for the profound pain and nerve degeneration patients with the condition experience. Their discovery points the way for potential new therapies. 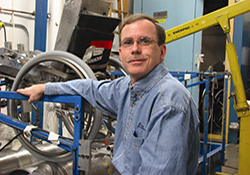 Rory A. Cooper, PhD, was the guest editor for a special issue on assistive technology published in July 2013 by the Journal of Spinal Cord Medicine. Scientists, clinicians, and engineers from the United States, Mexico, Japan, Great Britain, and the Netherlands contributed articles to the issue. In an editorial, Cooper wrote that "wearable or wheelchair-mounted sensors are becoming ubiquitous," and that robotic and intelligent systems "are likely to transform the quality of life and independence of people for years to come." Cooper, an Army Veteran who himself uses a wheelchair for mobility, is the founding director of VA Human Engineering Research Laboratories, located at the Pittsburgh VA Medical Center.