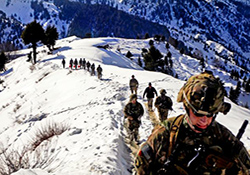 VA and the departments of Defense (DoD), Health and Human Services, and Education recently made public a wide-reaching plan to improve access to mental health services for Veterans, service members, and military families.

Once implemented, the plan will be used to improve scientific understanding of PTSD, TBI, various co-occurring conditions, and suicide. Other goals of the plan include providing effective treatments for these diseases, and reducing their occurrence.

"At VA, ensuring that our Veterans receive quality care is our highest priority," Secretary Eric K. Shinseki said in announcing the completion of the plan. "Investing in innovative research that will lead to treatments for PTSD and TBI is critical to providing the care our Veterans have earned and deserve."

Among the highlights of the plan is the establishment of two joint DoD/VA research consortia at a combined investment of $107 million. These include the Consortium to Alleviate PTSD, a collaboration led by the University of Texas Health Science Center—San Antonio, and the Chronic Effects of Neurotrauma Consortium, led by Virginia Commonwealth University.

All four federal agencies will continue collaborations with academia. They will also standardize, integrate, and share data as appropriate, build new tools and technologies, and work to maximize the impact of research findings.

Among the specific goals for the next two to four years are exploring genetic risk factors for mental health conditions; identifying changes in brain circuitry that result from PTSD and TBI; confirming biomarkers for PTSD and TBI; and establishing new data-sharing agreements.