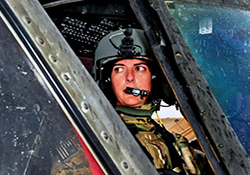 Researchers led by Melissa A. Polusny, PhD, of the Minneapolis VA Health Care System and the University of Minnesota questioned 712 male and 89 female National Guard members both before and after combat tours in Iraq or Afghanistan. They found 22.5 percent of the women, compared to 12.2 percent of the men, met screening criteria for probable PTSD following deployment. This is consistent with previous studies.

The researchers hypothesized that some of this disparity could be traced to pre-deployment events, such as sexual stressors. They didn't find a direct correlation, but they did find that women who had undergone trauma before being deployed had an increased risk of developing PTSD after exposure to combat, relative to other women in combat. This was not true in men. The researchers also learned that men who relied on their military unit as a source of support but were disappointed by the support they received were more likely to develop PTSD than were women in similar situations. Another key finding was that women who had undergone combat-related stressors, such as being injured in war, were more likely than men to develop PTSD as a result.

Polusny and her colleagues also found evidence suggesting that deployment may be particularly stressful for female military service members who must manage their lives and family responsibilities from afar, potentially exposing them to the dual stress associated with both war zone and family-related concerns. The authors caution that the study's scope included a relatively small subset of mostly Caucasian women. Therefore, the findings are tentative and require replication. (Journal of Psychiatric Research, February 2014)