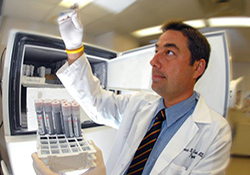 Dr. Alexander Niculescu is with VA and Indiana University School of Medicine. (Photo courtesy of IU)

Dr. Alexander Niculescu is with VA and Indiana University School of Medicine. (Photo courtesy of IU)

A series of riboneucleic acid (RNA) biomarkers in blood may help identify people at risk for committing suicide, according to researchers at the Richard L. Roudebush VA Medical Center in Indianapolis, Ind., and Indiana University. The biomarkers were found at significantly higher levels in the blood of both bipolar disorder patients with thoughts of suicide as well as in a group of Veterans and other people who had committed suicide. All of the research subjects were men.

Principal investigator Alexander B. Niculescu III, MD, PhD, believes the research offered the first "proof of principle" for a blood test that could provide an early warning of someone who would be at higher risk for an impulsive suicide act. He and his colleagues followed a large group of patients diagnosed with bipolar disorder, completing interviews and taking blood samples every three to six months. They found that the marker SAT1 and a series of other markers provided the strongest biological signal associated with suicidal thoughts.

Then they worked with the local coroner's office to take blood samples from suicide victims, and found that some of the same markers were significantly elevated. Finally, they analyzed blood test results from two additional groups of patients and found that high blood levels of the biomarkers were correlated with suicide-related hospitalizations as well as hospitalizations that had occurred before the blood tests.

Although the study's design had a number of limitations, such as being limited only to men, Niculescu hopes that biomarkers ultimately can help identify people at risk of suicide. This, along with tools including neuropsychological tests and sociodemographic checklists, can lead to preemptive intervention and counseling—and to saved lives. (Journal of Molecular Psychiatry, Dec. 2013)