A center focused on chronic-disease research 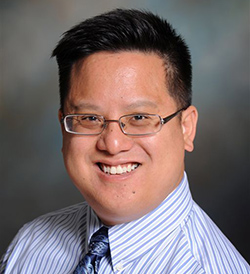 VA's Center for Chronic Disease Outcomes Research (CCDOR) is one of 19 HSR&D Centers of Innovation. The center, located within the Minneapolis VA Health Care System, currently supports 62 funded projects with an annual budget of over $8.8 million. VA Research Quarterly Update spoke with Steven Fu, MD, MSCE, director of the center, about its current projects, past accomplishments, and future goals.

VARQU: Tell us about the work of the Center for Chronic Diseases Outcomes Research.

Dr. Fu: Our mission is to promote patient-centered, high-value care for Veterans with chronic disease. We do that by conducting high-quality, innovative research to enhance patient engagement in evidence-based care and optimize provider use of evidence-based practices.

We have about 25 core investigators. We are an interdisciplinary community of physician-researchers, clinical psychologists, and research scientists. We do a lot of research across multiple areas of chronic disease.

We have three strategic areas of focus: posttraumatic stress disorder, cancer prevention and screening, and the management of chronic pain. We also do work on other chronic conditions, including issues like osteoporosis, abdominal aortic aneurysms, reduction of cardiovascular risk, and chronic obstructive pulmonary disease. Another area of focus is health disparities research.

VARQU: What are a few of the major accomplishments of CCDOR researchers?

Dr. Fu: Let me highlight a few noteworthy items. One is the work done by the RINGS (Readiness and Resilience in National Guard Soldiers) project team, which is headed by Dr. Melissa Polusny. This has been a big project for our center, and has been conducted in partnership with the Minnesota National Guard.

It's really one of the first studies that is able to obtain pre-deployment, in-theater, and post-deployment data to examine a number of factors related to risk and resilience, mental health problems, and subsequent mental health utilization. It will also provide information that can be useful for military retention and attrition.

A number of high-impact papers have come from the RINGS project. One of its main findings was demonstrating how, prior to deployment, the rate of probable PTSD in study subjects was about 3.5 percent. Immediately post-deployment, that increased to about 16 percent. RINGS researchers were looking at different predictors of PTSD, and found there were risk and resiliency factors present both prior to and following deployment that were associated with developing PTSD post-deployment.

Findings such as these have been used by both the Minnesota National Guard and the RINGS project team to inform the outreach referrals and other efforts that have been made to assist the reintegration of servicemembers.

Another main accomplishment I'd like to highlight is the work of Dr. Timothy Wilt in the area of prostate cancer. He and his team completed, a few years ago, the Prostate Cancer Intervention Versus Observation trial (PIVOT), a large, randomized, multi-site, VA cooperative study comparing radical prostatectomy versus clinical observation of prostate cancer.

This was a very significant study that demonstrated radical prostatectomy was not at all better than watchful waiting or observation. One of the impacts of the study, along with other work done with Dr. Wilt, is that eventually the PSA test was determined to be not a useful test for [routine] prostate cancer screening. The study helped to inform how we screen for prostate cancer and when the PSA test is, or is not, appropriate.

There's also the Veterans Victory over Tobacco Study. Our team's work was just published online in JAMA Internal Medicine. We leveraged VA's electronic medical record to create a registry of current smokers, and we tested a proactive model of care for tobacco treatment in which we did proactive outreach.

We went directly to current smokers within VA, and offered them care, instead of waiting for them to come to see the doctor and to ask for care on their own. We tried to make it easier for them to receive telephone counseling and medications, and found that we were able to substantially increase the rates of combination treatment for tobacco, which includes both behavioral counseling and medication therapy.

As we increased the reach of evidence-based treatments, we were also able to increase the population quit rate by 2.6 percent, which is highly significant because it's from a population that included all smokers, not just smokers who were interested in attempting to quit. It's an example of how a proactive care strategy can increase the impact of treatment on a population, and it's one of the first studies to examine these population impacts.

This is relevant, not only for tobacco treatment, but also for other treatments where one wants to increase the reach of evidence-based treatments.

VARQU: What are some of the areas CCDOR investigators are working on now?

Dr. Fu: Currently, we are fortunate to have one of VA HSR&D's Collaborative Research to Enhance and Advance Transformation and Excellence (CREATE) projects. Directed by Dr. Nina Sayer, CCDOR's associate director, our CREATE is focused on PTSD, and its goal is to improve outcomes for Veterans with PTSD through enhanced delivery and uptake of evidence-based treatments. We're really trying to enhance Veterans' engagement in treatments for PTSD.

We have a series of four projects in our CREATE. The first project is to test a Web-based tool to promote Veteran involvement in care for PTSD, and to help family members of Veterans with PTSD to encourage their service member to engage in care.

The second project is being conducted by an investigator [Anne G. Sadler, PhD, RN] at the Iowa City VA Medical Center, and has to do with enhancing women's care for PTSD within VA.

The third project is being led by Dr. Michele Spoont in our center. She's testing an intervention to work with VA primary care providers who work in VA community-based outpatient clinics (CBOCs). They don't have as much access to the resources available in medical centers—but they see a lot of people with PTSD in their primary care clinics. She is developing a provider intervention to help them to prescribe and deliver evidence-based pharmacotherapy for PTSD in a primary care CBOC setting.

That's the main focus right now of our current work. It's all called evidence-based therapies for PTSD, or EBT4PTSD. It's estimated that PTSD will become a chronic condition for about a third of Veterans who develop the disorder, but there are evidence-based treatments available for PTSD, and if we can get Veterans those treatments, we can keep PTSD from becoming chronic.

By enhancing access to and engagement with these therapies, we're hoping to help Veterans to live with PTSD and to prevent it from becoming a chronic condition. With effective therapy, PTSD can be managed, and the disabilities associated with PTSD can be reduced.

Dr. Fu: I'd like to talk about two areas: the first is lung cancer screening. Recently, the United States Preventive Services Task Force endorsed lung cancer screening, based on the results of the National Lung Screening trial. It's being recommended for high-risk current and former smokers.

The lung cancer screening would involve annual low-dose CT [computed tomography] scans for 50- to 80-year old current and former smokers. Dr. Petzel [VA Under Secretary for Health] has initiated a demonstration project within VA to assess the feasibility of, and to obtain experience with, this type of screening within VA. Minneapolis is one of VA's eight demonstration sites.

Since one of our areas of responsibility is cancer prevention screening, and we do a lot of work in tobacco, we're very interested in finding best practices to promote shared decision-making in the context of lung cancer screening, and also to promote smoking cessation in that context.

For example, we've just put in a proposal to evaluate the role of transcendental meditation. We're exploring those types of therapies to see if they might be of benefit to Veterans with chronic pain.

VARQU: What else should people know about the center?

One big highlight is that Dr. Timothy Wilt received the 2014 Under Secretary's Award for Outstanding Achievement in Health Services Research . This is the highest honor that a VA health services researcher can obtain. He delivered his acceptance speech on April 21.

This is really a high award for our center, and we're very proud and grateful to HSR&D to receive this recognition.