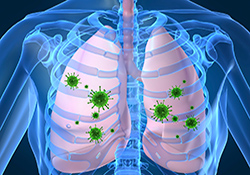 Bacteria in the lungs of patients with COPD may do more harm than previously thought, according to a study by researchers with VA and the University of Buffalo. (Photo: iStock)>

Bacteria in the lungs of patients with COPD may do more harm than previously thought, according to a study by researchers with VA and the University of Buffalo. (Photo: iStock)

Chronic obstructive pulmonary disease is a progressive disease that makes it hard to breathe. COPD can cause coughing that produces large amounts of mucus, wheezing, shortness of breath, chest tightness, and other symptoms.

Physicians have long known that patients with COPD have a number of bacterial pathogens in their lungs, because the disease compromises the lungs' innate defenses against bacteria, allowing bacteria to persist. Though this is abnormal, and potentially damaging, doctors have long believed that these bacteria were not harmful as long as the patient was not having a flare-up, or exacerbation, of his or her respiratory problems.

VA researchers and colleagues from the University of Buffalo School of Medicine and Biomedical Sciences recently published study results showing that COPD patients actually do experience more respiratory symptoms when their lungs are colonized by bacteria, even when they are not having acute respiratory problems. The study found that such bacterial colonization is sufficient to trigger clinically significant increases in shortness of breath, coughing, and sputum (a mixture of saliva and mucus coughed up from the respiratory tract), and to cause increased inflammation of a patient's airways.

The study team recommended that more research be done to determine why COPD makes those with the illness more susceptible to infection, and to test new drugs to prevent and treat these acute and chronic infections. Treating the infections should help improve the quality of life for patients with COPD. (Annals of the American Thoracic Society, March 2014)