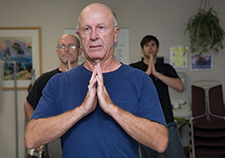 Evidence mapping is a recently developed methodology that provides clinicians with an understanding of the extent and distribution of the currently available evidence on a clinical topic. The maps highlight both what is known and where gaps in evidence exist, with the aim of speeding the implementation of practices supported by strong evidence, and highlighting those areas that require further study.

Although many different forms and definitions of mindfulness exist, basically the term refers to the intention to be more aware and engaged in the present moment. In preparing an evidence map on the subject, researchers found that depression was the area in which the most consistent beneficial effects were seen for various mindfulness interventions, and that mindfulness-based stress reduction programs were better than no intervention at all for chronic illness and for overall health and psychological outcomes. Mindfulness-based cognitive therapy had beneficial effects for mental illness, and many mindfulness interventions helped people with sleep disorders.

Tai chi is a Chinese exercise system that uses slow, smooth body movements to achieve a state of relaxation of both body and mind. HSR&D's evidence map reviewed previous studies for tai chi's effect on pain, PTSD, and fall prevention. Researchers found statistically significant beneficial effects for hypertension, falls outside of institutions, cognitive performance, osteoarthritis, chronic obstructive pulmonary disease, pain, balance confidence, depression, and muscle strength. They cautioned, however, that firm conclusions cannot be drawn, given the methodological limitations in the original studies, and the insufficient number of studies.

Yoga includes breath control, simple meditation, and physical exercise involving specific body postures. It is widely practiced for health and relaxation. The investigators who prepared the yoga evidence map suggested that yoga can improve functional outcomes in patients with nonspecific chronic low back pain, but that the existing evidence is less clear about the effectiveness and safety of yoga for other conditions of interest, including depression and other common chronic health conditions in Veterans.

Acupuncture, which originated in China, is the practice of inserting fine needles through the skin at specific points to cure disease or relieve pain. Researchers preparing the acupuncture evidence map found that the available published literature on acupuncture is extensive. However, rigorous, consistent evidence of positive effects across any area was limited. The researchers note that higher-quality studies are only beginning to emerge, and further research is needed.