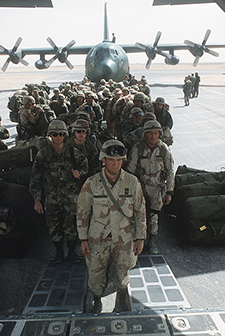 Army troops wait to board a C-130 for the trip to Fort Bragg, N.C., following the liberation of Kuwait during Operation Desert Storm. Behind the troops is another C-130 Hercules aircraft. (Photo by Senior Tech. Sgt. Donald McMichael/USAF)

Army troops wait to board a C-130 for the trip to Fort Bragg, N.C., following the liberation of Kuwait during Operation Desert Storm. Behind the troops is another C-130 Hercules aircraft. (Photo by Senior Tech. Sgt. Donald McMichael/USAF)

Many Veterans of operations Desert Shield and Desert Storm, which took place in 1990 and 1991, returned home with a number of health problems. Common symptoms include chronic fatigue, joint and muscle pain, memory problems, respiratory difficulties, digestive problems, and skin rashes. A single condition encompassing all these symptoms has been difficult to diagnose and define.

Because of the complicated and multifaceted nature of these health problems, VA asked the Institute of Medicine (IOM) to review the case definitions that have been proposed for the illness. Case definitions are sets of uniform criteria used to define a disease for public health surveillance, allowing public health officials to classify and count cases consistently across reporting jurisdictions.

Illnesses reported by Gulf War Veterans have been called a variety of names over the years, but IOM recommended in its report that VA and others use the term "Gulf War illness" going forward. The report also recommended that VA researchers and clinicians use case definitions created by the U.S. Centers for Disease Control and Prevention (CDC) or the Kansas Persian Gulf War Veterans Health Initiative.

VA's Office of Research and Development (ORD) has now decided to use the CDC and Kansas definitions for the condition. Going forward, ORD will use the term "Gulf War illness presenting as chronic multisymptom illness." Dr. Robert Jaeger, director of deployment health research for VA, notes: "As in the past, terminology continues to evolve. There are many other considerations within VA that must be resolved with respect to this terminology."

VA researchers are continuing to learn about these conditions and identifying the best ways to diagnose and treat them. Funding for this research has increased in recent years. The efforts are guided by a strategic plan for Gulf War research that was developed with input from leading scientists and researchers, physicians, and Veterans themselves. The plan is reviewed periodically and updated to make sure it incorporates the latest knowledge.