The legacy and lessons of the VA Diabetes Trial 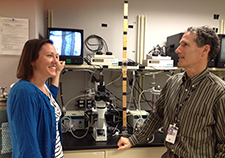 In January 2009, a team of VA researchers published a study in the New England Journal of Medicine titled "Glucose Control and Vascular Complications in Veterans with Type 2 Diabetes." In that large randomized clinical trial, funded by the VA Cooperative Studies Program and known as the VA Diabetes Trial (VADT), investigators tried to determine whether intensive levels of glucose control were beneficial to patients—specifically, whether they could help ward off heart attacks, stroke, and other cardiovascular events.

The initial study helped confirm that tight glucose control can be achieved safely in most patients; however, patients with long-standing diabetes and at high risk for cardiovascular disease (CVD) experienced only a modest benefit in reducing their CVD over a five- to six-year period. This provided support for the idea that glucose control needs to be personalized, and that clinicians need to better identify those who are likely to benefit from intensive control of their glucose levels, and be more judicious in recommending intensive control to those who are older, sicker, at risk for hypoglycemia, and already affected by CVD.

The VA Cooperative Studies Program is now conducting a follow-up study of Veterans who were part of the cohort studied in the initial trial. VARQU spoke with Dr. Peter Reaven, director of the diabetes program at the Phoenix VA Health Care System, one of the three lead investigators on the VADT follow-up study, and a member of the initial study team.

The study involved 1,791 individuals from 20 VA sites around the country. There was a good geographic distribution of sites, and the study cohort had a relatively reasonable representation of African Americans and other ethnic groups, such as Hispanics. Obviously, because it was a Veteran population, the number of women was relatively low, and therefore the results are less generalizable to women.

The treatment goal was a comparison of glucose lowering to a median hemoglobin A1c level of just below 7 for those randomized to the more aggressive group, versus an 8.4 for those who were randomized to the standard glucose control group. [Hemoglobin A1c is a measure of average blood glucose during the previous two to three months. It is one of the markers, along with blood pressure and cholesterol control, of good diabetes care.]

The types of medication taken were relatively similar for the two groups, except that the dose or frequency of use of the medications was increased for the aggressive treatment group. VADT therefore became a legitimate comparison of glucose control as opposed to medication category, and that is an important aspect of the trial—because other trials were less rigorous regarding the categories of medications used in the two treatment groups. That leaves open the possibility there may have been differences in the two treatment groups in other trials that were medication-specific, rather than related to glucose-lowering.

In contrast to the different glucose-lowering intervention efforts, the two treatment groups had equally well-optimized blood pressure and blood lipid [cholesterol and triglyceride] control. Other preventive medications, such as aspirin, were similarly used in both groups. Again, the effort was to try to isolate the consequences of improved glucose control as opposed to other risk-reducing interventions.

VARQU: What do you see as VADT's most significant accomplishments?

Reaven: The results, which have been published in several manuscripts, have pointed to the fact that glucose control was substantially better in the intensively treated group, with a median difference in A1c of about 1.5 percent between treatment groups. The blood pressure and lipid control was quite good in both groups, and was consistent with prevalent treatment guidelines.

There was no clear difference between groups among individual components of cardiovascular outcomes, and no increase or decrease in mortality. This latter finding is different compared with what was found in the Action to Control Cardiovascular Risk in Diabetes [ACCORD] study [sponsored by the National Heart, Lung, and Blood Institute], which did show an increased risk for mortality in the intensively treated group.

So our results demonstrated that intensive glycemic control as conducted in the VADT did not increase mortality, but showed only a trend for a modest favorable effect on total cardiovascular events. The latter conclusion is consistent with the overall results of two other major studies that were published in a similar time frame—ACCORD [which found a reduction in nonfatal heart attacks, notwithstanding a higher overall death rate in the intervention group] and the Action in Diabetes Control and Vascular Outcomes [ADVANCE] study [an international study on intensive glycemic treatment].

Also somewhat surprising in our study was the microvascular [minute blood vessel] outcome data, which showed, again, only modest improvement in the amount of urine protein for those in the intensive control group—with no real difference in clinically important endpoints, such as the development of renal failure, the doubling of creatinine [a chemical waste product filtered by the blood through the kidneys], neuropathy [weakness, numbness, and pain from nerve damage], and diabetic retinopathy [a condition causing progressive damage to the retina].

There were some indications that those with less advanced disease, people who had had diabetes for a shorter time before their enrollment in the study, and those with less vascular calcification appeared to gain greater benefit from intensive glycemic control. This appears consistent with data coming out from other studies, and was consistent with prior data from the United Kingdom Prospective Diabetes Study [UKPDS, a 20-year study concluded in 1997), in which new diabetes patients were also shown to have improved cardiovascular outcomes in response to improved glucose control.

VARQU: What does the follow-up to the original trial involve?

Reaven: The VADT results beg the follow-up question: If during the course of five or six years of intensive control the effect is relatively modest, what happens over a greater time? Will the improvements in glucose control over this earlier period lead to long-term improved consequences? That's the basic question the VADT follow-up hopes to answer.

The way we are pursuing that is through central database collection of information on the VADT cohort for over nine years of additional follow-up after the end of the VADT study, when these patients were turned over to general diabetes care in various clinics in VA facilities throughout the country. We are tracking a limited set of cardiovascular disease and microvascular disease outcomes through the electronic record systems. This involves not only VA's health care system records but also several national databases that can be accessed for this type of information.

We are following a fairly similar, but more limited, set of cardiovascular composite outcomes. We are also following renal disease outcomes through measurements of creatinine and estimates of the glomerular filtration rate [GFR], which is an important indicator of how well kidneys are working. The plan is to follow the original VADT cohort for an additional nine years after the completion of the VADT study. To date, there have been approximately five years of post-VADT data collected, with four more years of follow-up planned.

VARQU: What do you hope VADT's legacy will be for other researchers, for Veterans, and for Americans with diabetes?

Reaven: We hope the legacy is that we have conducted one of the more definitive studies of glucose control, cardiovascular events, and microvascular disease complications. We believe that this well-conducted study, with its unique long-term follow up, will provide the necessary information that truly allows care providers to make the appropriate decisions regarding how to institute intensive glycemic control: how long is it necessary; who may benefit from this; and who should, perhaps, be treated more conservatively, to avoid serious adverse events, with the knowledge that not all individuals will benefit from intensive glycemic control.

I think it is important to acknowledge that the group of individuals that began the study is unique. They were relatively far along in the diabetes process, with a duration of 10 years or more on average, and at high risk of cardiovascular disease. That does not represent all patients with diabetes, and so our data and results need to be interpreted with that information about the cohort in mind.