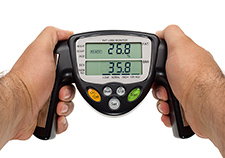 A body mass index (BMI) of 30 or greater is the medical criterion for obesity. Researchers at the Durham VA Medical Center have been studying the risks and benefits of weight-loss surgery for people struggling with obesity. (Photo: ©iStock/Lebazele)

A body mass index (BMI) of 30 or greater is the medical criterion for obesity. Researchers at the Durham VA Medical Center have been studying the risks and benefits of weight-loss surgery for people struggling with obesity. (Photo: ©iStock/Lebazele)

Bariatric surgeries, which include a number of different procedures performed on the stomach or intestines to induce weight loss, do more than help obese people shed pounds they cannot otherwise lose. The procedures also help severely overweight patients live longer, according to a recent VA study published in the Journal of the American Medical Association.

The retrospective cohort study, which involved 10,000 VA patients throughout the nation, found that the 2,500 Veterans who had had the surgery had a 53 percent lower risk of dying from any cause at 5 to 14 years after the procedure, compared with the 7,500 matched control patients who had not. While previous studies had shown that younger, mostly female populations had improved their survival rates, the current study population was older, with a mean age of 52, and was 74 percent male.

In addition, 55 percent of those in the VA study had diabetes, and many had other chronic diseases such as high blood pressure, arthritis, heart disease, and depression.

"We also found evidence that bariatric surgery has become safer," Dr. Matthew Maciejewski of the Durham VA Medical Center and Duke University said in a news release from the Group Health Research Institute. "We found that the risk of dying during and soon after bariatric surgery was lower in 2006 - 2011 than in 2001 - 2005."

The research team now hopes to find answers to additional questions about various forms of bariatric surgery, including whether it helps certain subgroups of Veterans more or less. They also hope to learn how long weight loss lasts after surgery, and at what level; whether the course of diseases associated with obesity, such as diabetes, is changed; and what the effects are of the surgery on total health care costs in the long run. (Journal of the American Medical Association, Jan. 6, 2015)