Diet and cardiovascular disease in women 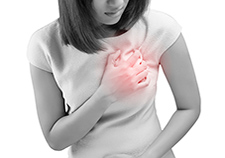 The linkage between a Western-style diet and cardiovascular disease in women was explored in two recent articles by a research team from the Harry S. Truman VA Medical Center in Columbia and the University of Missouri.

The group, led by Dr. James Sowers, started with the understanding that the consumption of a diet high in fat and refined carbohydrates (what they called a Western diet) is associated with both obesity and resistance to insulin. They also understood that women are somewhat protected against cardiovascular disease by estrogen, and that this protection tends to disappear in women who are obese or diabetic.

In their first study, they hypothesized that estrogen receptors, molecules on the surface of cells or within cells that recognize and bind with the hormone estrogen, were involved in that process. They used genetically altered female mice to see if turning off the functioning a specific type of estrogen receptor, called estrogen receptor α, might reduce the rate in which cardiovascular disease developed.

They found that the signaling created by that receptor contributed to vascular stiffness, a symptom of cardiovascular disease, in mice fed a Western diet.

In a second study, published a month after the first, the team reported that deactivating a different receptor, called the mineralocorticoid receptor, can keep female mice being fed a Western diet from developing stiffness in their aorta, the main artery of the body that supplies oxygenated blood to the circulatory system.

Both the estrogen and mineralocorticoid receptors involved were in endothelial cells lining the blood vessels. (Endothelial cells are a thin layer of flat cells that line the inside of body cavities.)

Together, the two studies are helping to unlock the causes of cardiovascular disease in women, and may help to find new treatments or preventive strategies.