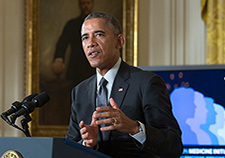 On Feb. 25, 2016, President Obama spoke at a summit conference on the future of precision medicine in the United States. Military Times reported on a specific aspect of the president's remarks—the major role VA Research will play in this area.

"VA has been gathering genomic data on a large number of men and women who have served their country, in order to serve them better in the VA system," said the president. "But this can be connected with researchers in a university setting who are focused on a specific disease, and they can use this big data to accelerate their research."

Obama was referring to VA's Million Veteran Program (MVP), which was launched in 2012. MVP was conceived and implemented to foster genomic medicine and to bring precision medicine to the forefront of VA health care.

The program aims to build one of the world's largest databases of genetic, military exposure, lifestyle, and health information. VA is seeking blood samples from 1 million Veterans throughout the nation. The blood samples will be stored anonymously for future research.

As of the end of March 2016, more than 464,000 Veterans had enrolled in MVP. The program is expected to reach its goal of having DNA and health data from 1 million Veterans in the next few years.