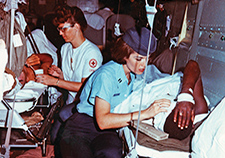 A U.S. Air Force flight nurse and a Red Cross nurse attend to American wounded aboard an Air Force C-141 prior to evacuation from Tan Son Nhut Air Base in Vietnam in 1967. (U.S. Air Force photo)

A U.S. Air Force flight nurse and a Red Cross nurse attend to American wounded aboard an Air Force C-141 prior to evacuation from Tan Son Nhut Air Base in Vietnam in 1967. (U.S. Air Force photo)

Teams of VA and non-VA researchers recently prepared a series of articles to investigate how and why women Veterans' health differs from that of their counterparts who did not serve in the military. Data for these analyses came from the Women's Health Initiative (WHI), one of the largest American prevention studies, and the largest, most ethnically and geographically diverse study of women in the United States. Results of a number of these studies were published in a special Feb. 1, 2016, issue of The Gerontologist.

Among the findings described in the special issue:

Overall, the findings reported in the 16 articles in the journal demonstrate that older women Veterans are a special population with certain risks that are higher than those of their WHI counterparts. The findings suggest areas for future research, as well as ways to improve preventive services and health care for future generations of women Veterans.

In 1992, the WHI was funded by NIH to address the most common causes of death, disability, and impaired quality of life in postmenopausal women. The five-year recruitment period for the study ended in 1998. Of the 161,808 women enrolled in the study, 3, 719 had been on active duty in the armed services for 180 days or more. More than 90,000 of the women who enrolled are alive and their health status is still being followed.