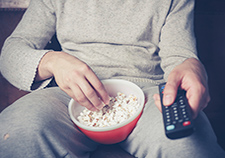 VA researchers and colleagues with the Heart and Soul Study have homed in on the relationship between depression and unhealthy lifestyle behaviors, such as inactivity and overeating. (Photo: ©iStock/lofilolo)

VA researchers and colleagues with the Heart and Soul Study have homed in on the relationship between depression and unhealthy lifestyle behaviors, such as inactivity and overeating. (Photo: ©iStock/lofilolo)

Depression is more the cause of poor health behaviors, such as smoking, low levels of physical activity, poor sleep quality, and poor adherence to doctor's orders, than a consequence of those behaviors.

That's the conclusion of researchers with the Heart and Soul Study who looked at symptoms of depression and lifestyle behaviors in 667 Veterans with stable coronary heart disease over a period of five years. The group found that the severity of the Veterans' depression predicted further declines in all of their health behaviors.

While the team's findings also predict a change in depression symptoms over the five-year period, that association decreases after results are adjusted for baseline depressive systems and other variables.

The study's leader, Dr. Mary Whooley of the San Francisco VA Medical Center and the University of California, San Francisco (UCSF), has previously called the relationship between depression and heart disease "complex and bidirectional."

She noted that the poor behavioral habits caused by depression unleash a cascade of biological changes including faster heart rate, higher blood pressure, the release of stress hormones, and a rise in the level of inflammation in the body—all of which contribute to cardiovascular disease.

Those with cardiovascular disease have increased physical health problems and have difficulty in completing everyday tasks. This in turns aggravates depression, and the cycle begins again.

The Heart and Soul Study is a joint effort of VA and UCSF researchers. Whooley and her colleagues enrolled 1,024 patients in the San Francisco area, including 440 Veterans, between 2000 and 2002. They have followed the participants since then to understand the association between psychological factors and cardiovascular events.