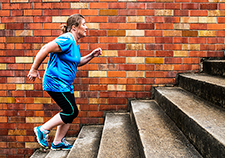 Certain groups of Vets experience obesity at much greater rates than others. (Photo for illustrative purposes only. ©stevecoleimages)

Certain groups of Vets experience obesity at much greater rates than others. (Photo for illustrative purposes only. ©stevecoleimages)

Worldwide obesity has reached epidemic proportions. In the U.S., obesity prevalence is estimated at 38 percent nationwide. Among the 5 million Veterans who use the Veterans Health Administration (VHA) for their primary care, 37 percent are overweight and 41 percent are obese, according to VA researchers.

Dr. Jessica Breland is a researcher with the Center for Innovation to Implementation at the VA Palo Alto Health Care System in California. She and her team reviewed 2014 data from the Women's Health Evaluation Initiative and VHA Vital Signs to evaluate and describe the prevalence of obesity within key VHA population subgroups. They published their findings in the April 2017 issue of the Journal of General Internal Medicine.

Given the high prevalence of obesity among Veterans who use the VHA, the researchers felt it was important to look at variables such as gender, age, rural or urban residence, and race and ethnicity to better target weight-loss programs and treatments like bariatric surgery. They found significant differences in obesity prevalence in different subgroups of Veterans.

Of the total sample of 4.9 million Veterans, more than 347,000 were women. Obesity prevalence for women was 44 percent, compared to 41 percent for men. Other significant findings include:

* Click here to view an infograph of key data from this study.