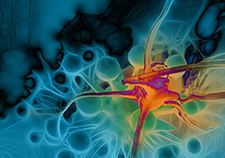 "Sprouty" might sound like something you pick up in the produce section at Whole Foods, but it's actually a gene. The Sprouty2 gene, which expresses a particular protein (SPRY2), suppresses tumor spreading, referred to as metastasis, in breast, prostate, and liver cancer. But researchers at the Harry S. Truman Memorial Veterans' Hospital in Columbia, Missouri, and University of Missouri discovered that the gene functions differently in colorectal cancer.

"What we've found is in colorectal cancer, in some scenarios, it may help a tumor to grow and move to other parts of the body," Khare told Columbia, Missouri, National Public Radio station KBIA.

The study shows that the Sprouty2 gene can promote a process called epithelial-mesenchymal transition in colorectal cancer, which can lead to the cancer spreading. In epithelial-mesenchymal transition, affected cells lose adhesion to other cells and can travel through the bloodstream, which can lead to cancer cells spreading. This process is also involved in natural functions such as wound healing.

The results indicate a role of SPRY2 in the progression and worsening of colorectal cancer. Suppression of Sprouty2 may inhibit epithelial-mesenchymal transition in colorectal cancer patients, say the researchers.

The results were published in a June 2016 issue of the journal Oncogene.