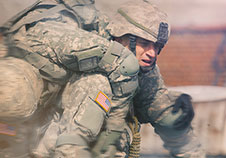 VA researchers have found evidence that Veterans who were severely injured in combat are at greater risk for developing high blood pressure later in life. (Photo ©iStock/Bluberries)

VA researchers have found evidence that Veterans who were severely injured in combat are at greater risk for developing high blood pressure later in life. (Photo ©iStock/Bluberries)

Veterans who served during the Afghanistan or Iraq wars and were severely injured are at greater risk of developing high blood pressure later in life, according to a study published in Hypertension. Researchers say injury severity is an independent risk factor for high blood pressure, and does not depend on later development of posttraumatic stress disorder.

Researchers at the Department of Defense Joint Trauma System, the VA Salt Lake City Health Care System in Utah, and other medical institutions reviewed the records of 3,846 service members who were injured in combat during the Afghanistan or Iraq conflicts. Their goal was to examine the relationship between severe physical combat injuries, PTSD, and the development of high blood pressure.

Data was retrospectively collected for military service members who were injured during service in Afghanistan or Iraq, during the period Feb. 1, 2002, to Feb. 1, 2011. The researchers used ICD-9 codes within the medical records to determine each instance of a PTSD and high blood pressure diagnosis after combat injury for a 10-year period.

PTSD is associated with a host of poor health conditions, such as obesity, substance misuse, heart disease, and high blood pressure. Studies have shown that psychological stress can cause inflammation within the body, which is a contributing factor in many diseases.