'Dual use' Veterans may be at risk for unsafe opioid use 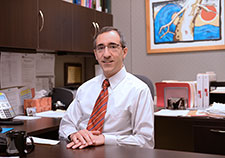 Dr. Walid Gellad, a researcher at the VA Pittsburgh Health Care System, has identified potential safety risks when Veterans use both VA and Medicare Part D to fill their opioid prescriptions. (Photo by William A. George)

Dr. Walid Gellad, a researcher at the VA Pittsburgh Health Care System, has identified potential safety risks when Veterans use both VA and Medicare Part D to fill their opioid prescriptions. (Photo by William A. George)

Dr. Walid Gellad is a primary care physician and health services researcher with the Center for Health Equity Research and Promotion at the VA Pittsburgh Healthcare System. He is also director of the Center for Pharmaceutical Policy and Prescribing at the University of Pittsburgh. He is considered a national expert on prescription drug pricing and patient medication adherence.

Gellad's research is focused on developing more effective prescribing practices for physicians and Veterans, and improving the way the VA health care system functions—in terms of better access to medications and safer prescribing practices. His research has been funded in large part through VA's Health Services Research and Development service.

VARQU spoke with Gellad about a recent study in which he and his coauthors examined Veterans who used both the VA health care system and Medicare Part D to receive prescription opioid medications, and the potential for harm that practice poses.

Welcome, Dr. Gellad. Does VA follow the Centers for Disease Control and Prevention guidelines for the safe prescribing of opioid medications, or does it have its own guidelines?

Podcast: Dual use of VA and Medicare heightens risk for unsafe opioid use

The guidelines advocate using strategies like not using opioids first-line, starting opioids at a low dose, not starting with long-acting opioids, and being aware of the dosage of opioids that you are putting a patient on. Those strategies are all focused on establishing functional goals. Physicians are really asking, "What do I want the opioid to do for the Veteran, to help them function?"

There are many people who think physicians should limit the amount of opioids patients receive. Can you explain what morphine milligram equivalent means, and why that is important? 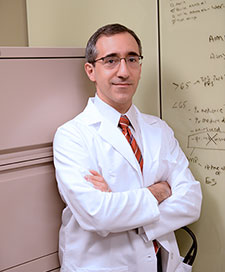 The morphine milligram equivalent (MME) is a way to standardize the dose of opioids across different opioid medications. So if you have one patient who is taking Vicodin and another patient who is taking Percocet and yet another one who is taking morphine, those drugs have different potencies. Some are a lot stronger than others when it comes to opioids: If you are on 10 mg of morphine that's not the same as 10 mg of oxycodone. So this is a way to standardize the opioid prescription across all types of opioids; you just use the term morphine milligram equivalent.

Is there a standard opioid dosage recommendation for patients?

That's where there is a lot of controversy now. I think there is no fixed answer—it's very complicated. There are more adverse events as the opioid dose gets higher. There's no doubt about that. So I think everyone is in agreement that the lowest dose one gets improvement on is the best dose. There are specific thresholds in the CDC guidelines, like 50 MME and 100 MME or 90 MME. Where policy experts really start worrying about safety is at 50 MME, and they say people generally shouldn't be on 90 MME or you should try and get them below 90 MME. That's just a reflection of wanting to get Veterans and all patients on the lowest dose possible.

The concern is that some physicians are using that dosage level as a fixed cut-off—and if a patient is over that then they automatically need to be cut down below that level of morphine equivalent. That's where the controversy lies. But most would agree that the higher the MME dose, the greater the side effects and the greater the risk of adverse events.

Your study looks at Veterans who received their drugs both through the VA health system and Medicare Part D. Is that a common occurrence?

One of the premises of the study was that if you get medications from two different places—the VA and outside the VA, paid for by Medicare—there's a risk that you are going to get a higher dose or drugs that interact, because generally, the VA physicians are not talking to the non-VA physicians. And until very recently, there has not been a lot of use of prescription drug monitoring programs to see what was being dispensed outside of the VA and vice versa. Providers outside the VA couldn't see what was happening within the VA.

So there is a big risk—because of the fragmentation of care, because of the lack of communication, because these are different providers who are prescribing—that you will have overlapping meds, inappropriate meds, and more risky prescribing.

Can you talk about your study methods and conclusions?

For this particular study that is out now, we used data that were linked between VA and Medicare Part D. The VA does have this data available for research purposes, but it is older, so it is a few years outdated. And we used this linked data to look at anyone in the year 2012 who had filled an opioid prescription either in VA or Medicare Part D. Then we looked at those who had received opioids in VA only, Medicare Part D only, or both. In that year, 13 percent of Veterans had received opioids from both VA and Medicare. And in many of those cases, it was actually overlapping—the opioids were prescribed at the same time in both VA and Medicare.

So the point of the paper was to describe the prevalence of that problem, because it hadn't really been known before. And also we looked at the dosage that people received and identified that those who get their opioids from both VA and Medicare are more likely to get doses that many would consider too high. There's a quality measure that is used in Medicare for dosage. We looked at the proportion of Veterans who were identified as potentially on unsafe doses of opioids. That's 90 consecutive days: So for 90 days in a row you have a morphine equivalent level of over 120. We found that there was a much higher risk among those Veterans who received opioids from both systems for having that high dosage.

What are the next steps? Where would you like to take your research beyond this?

And then also we have data not just on opioid prescribing—we have been able to link in data on overdose death. We are now looking at the relationship between some of these measures that we've looked at for dual use and opioid prescribing, and actually seeing who dies from an opioid overdose. This work is ongoing.

How would you propose to address the problem of dual users—Veterans who are getting medications from both systems?

There are things that VA can do, and then there are things that individuals can do. For the Veterans it reemphasizes the importance of keeping track of all their medicines that they are taking, whether it is from VA or outside VA. And letting the clinicians know what those medicines are, even if they don't ask. The providers they see in the VA and outside the VA are going to want to know the medicines they take, regardless of where they get those medicines from.

In my experience, often the patients don't realize that when they split getting their medicines from VA and outside the VA, there are some risks involved, even though in some cases it can be a little easier and sometimes a little cheaper to get medications outside of VA. I think many of the Veterans don't think about those risks. When something is dispensed in the VA, there are automated systems to look at drug interactions. That can't be done when a medication is dispensed outside the VA—the VA can't look at that information.

I'm currently working to improve data-sharing between these large federal systems, VA and Medicare, so the VA can know a little bit more about what is happening in Medicare. That's an ongoing process. These are two large federal systems, and they are both trying to care for these large, and in some cases, overlapping populations. That's where the implementation part of this research is going.

To clarify, VA can see only what is inside Veterans' electronic health records, and that system does not communicate with outside systems in the community. Correct?

Yes. VA has done a tremendous amount to address prescription opioid use among Veterans to improve safety. All of that effort has focused within VA, because that is what they are measuring. There is still not an easy way to nationally measure opioids that Veterans might be getting outside the VA. And not just opioids, it could be interacting medicines like benzodiazepines or muscle relaxers or sleep drugs. So that is the problem: There is no mechanism for VA to systematically include those non-VA prescriptions into its utilization management and all the reviews it does for safety.