Investigating the use of precision medicine to treat depression 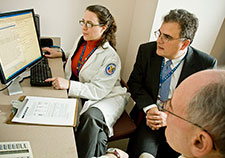 Dr. David Oslin (center), a researcher at the Corporal Michael J. Crescenz VA Medical Center in Philadelphia, is testing the use of genetic information to tailor drug therapies for Veterans with major depression. (Photo by Tommy Leonardi)

Dr. David Oslin (center), a researcher at the Corporal Michael J. Crescenz VA Medical Center in Philadelphia, is testing the use of genetic information to tailor drug therapies for Veterans with major depression. (Photo by Tommy Leonardi)

The initiative, PRIME Care (PRecision medicine In MEntal health Care), is led by Dr. David Oslin of the Corporal Michael J. Crescenz VA Medical Center in Philadelphia. It is scheduled to run through June 2022 at more than 20 VA sites across the nation.

Veterans taking part in the effort will submit a cheek swab so researchers can test their DNA. The results could help their providers decide which antidepressant to prescribe—and at what dose, since the test results will tell how well the patient metabolizes the drugs.

In May 2016, a VA QUERI Evidence-based Synthesis Program (ESP) brief confirmed that pharmacogenomics (the study of how genes affect response to drugs) might help identify optimal treatments for those with depression by helping predict how they might respond to particular antidepressants.

Oslin's group will provide genomic test results for Veterans with major depressive disorder to both the patients and their providers, in hopes of establishing the clinical validity of pharmacogenomic testing.

They plan to recruit 2,000 Veterans and their providers for the study. Half the patient-provider pairs will receive genomic test results at the start of the study. The other half, serving as a control group, will get the results six months later. The researchers have hypothesized that the first group will have higher rates of remission of depression than the other group. They also believe that the genomic testing could lead to fewer contraindicated medications being prescribed to patients.

In a summary of the study, Oslin explains that "to achieve remission from depression, patients and providers must be persistent and try multiple treatments until they find one that is both tolerable and effective." But each round of unsuccessful treatment takes its toll on the patient. Oslin's group hopes that genomic testing could lead to earlier successful treatment, leading to more rapid depression remission.

Besides looking at the Veterans' outcomes, the study will examine the most effective ways to provide these results to Veterans and health care professionals. Proponents hope the study will help guide similar studies of other illnesses and medications.

Dr. Kewchang Lee, a psychiatrist at the San Francisco VA Medical Center, recently signed up for the study. He told the San Francisco Chronicle how the testing could change his care. "Different people for genetic reasons metabolize things differently," he explained. "With fast metabolizers, I might not necessarily change the antidepressant, but might target a higher dose. If a patient is a slow metabolizer, I might consider changing the antidepressant itself depending on the side-effect profile of that drug."