ORD Home » Pubs » Varqu » Summer2014  » In the News: Rejuvenation factor in blood turns back the clock in old mice

Rejuvenation factor in blood turns back the clock in old mice 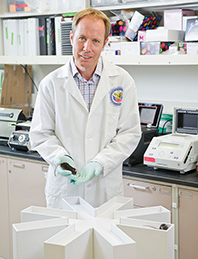 Dr. Tony Wyss-Coray and colleagues found that injecting blood from young mice into old mice had a rejuvenating effect. (Photo by Curt Campbell)

Dr. Tony Wyss-Coray and colleagues found that injecting blood from young mice into old mice had a rejuvenating effect. (Photo by Curt Campbell)

The May 9, 2014, issue of Science featured an article about three research studies that showed that blood from young mice could reverse cognitive aging in older mice. One of those studies was done by researchers with the VA Palo Alto Health Care System, Stanford University, and the University of California, San Francisco.

The studies follow up on centuries of speculation about the effect young blood can have on the elderly. The VA study, led by Dr. Tony Wyss-Coray, injected older mice (about 60 years old in human years) with plasma drawn from mice that were about 20 years old in human years. The hippocampi of the mice that were given injections of young plasma for several years stopped shrinking, and their scores on memory and learning tests, such as remembering their way through mazes, improved by roughly 50 percent.

In humans, the hippocampus is one of the first areas of the brain to show degenerative change in Alzheimer's and dementia patients. In a few months, Wyss-Coray plans to initiate a clinical trial with early-stage Alzheimer's patients.