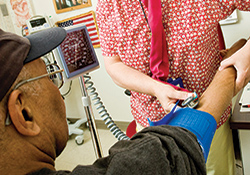 The routine annual physical may be overrated, according to VA's Dr. Jeremy Sussman, who was quoted in an AARP magazine article.

The routine annual physical may be overrated, according to VA's Dr. Jeremy Sussman, who was quoted in an AARP magazine article.

A recent article in AARP magazine included a statement from a VA researcher that may have surprised some readers. Dr. Jeremy Sussman of the VA Ann Arbor Health Care System asserted that there is little evidence that having an annual checkup keeps people healthy, and that many tests physicians regularly perform don't make sense unless there's a reason to suspect a problem.

According to Sussman an individual's specific needs should determine how often he or she sees a physician. "We certainly don't think people should never see doctors—quite the opposite," he is quoted as saying. "We question the value of seeing someone for the sake of seeing someone."

Sussman served on a Society of General Internal Medicine task force that made recommendations to the Choosing Wisely initiative, sponsored by the ABIM foundation. The initiative aims to promote conversations between health care providers and patients by helping patients choose care that is supported by evidence; not duplicative of other tests or procedures already received; free from harm; and truly necessary.