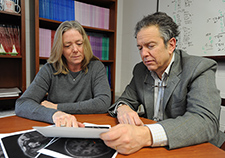 Mild traumatic brain injury (TBI) is associated with a number of changes to the brain, including to its white matter structure. White matter is a component of the central nervous system that affects how the brain learns and functions.

Researchers with VA's Translational Research Center for TBI and Stress Disorders (TRACTS), located at the Boston VA Medical Center, asked 249 Iraq and Afghanistan Veterans detailed questions about their combat history, and screened them for a variety of mental and physical health issues. They found that 195 of the Veterans had been exposed to bomb blasts within 100 feet, and 56 had not.

Each of the Veterans in the study underwent a brain-imaging procedure called functional MRI. The procedure showed how the parts of their brain communicated when they were not involved in any particular task. The research team found that Veterans exposed to bomb blasts showed fraying in their white matter structure—the same type of fraying that happens in the normal aging process, only at a much faster rate. Those exposed to a higher number of blasts tended to exhibit that fraying even more quickly.

"These are exposures to blasts, not necessarily blasts that lead to concussion, but feelings of fuzziness or getting knocked out," TRACTS director Dr. Regina McGlinchy told CBS News. "These are events where the Veterans themselves thought they were just fine." Her TRACTS colleague Dr. William Milberg told USA Today that "the most important message...is that they show that exposure to explosions in combat affects the brain whether or not the soldier showed symptoms of a concussion at the time of the explosion."

According to CBS News, the consequences of this potentially premature brain aging could be increased rehabilitation time and earlier need for health care for aging issues like dementia. (Brain, June 1, 2015)