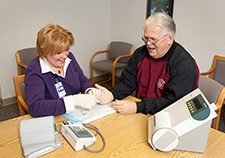 Nurse manager Kelly Johnston checks the blood sugar of a Veteran at the Ann Arbor VA. (Photo by Scott Soderberg)

Nurse manager Kelly Johnston checks the blood sugar of a Veteran at the Ann Arbor VA. (Photo by Scott Soderberg)

In January 2009, VA researchers published the initial results from the VA Diabetes Trial in the New England Journal of Medicine. The study confirmed that tight glucose control can be achieved safely in most patients with diabetes. However, patients with long-standing diabetes and at high risk for cardiovascular disease (CVD) received only modest benefits in reducing their CVD over a five- to six-year period.

The spring 2015 issue of this newsletter included an interview with Dr. Peter Reaven, a Phoenix VA Medical Center researcher who is one of three lead investigators on a follow-up study on Veterans who were in the initial trial. Some results from the follow-up study have now been published and indicate that intensive management of glucose levels can prevent cardiovascular events, such as heart attack, stroke, and congestive heart failure over a long period of time—even after the intensive management has been discontinued.

The VADT team found that those Veterans who had been randomly assigned to the intervention group and achieved lower glucose levels had 8.6 fewer major cardiovascular events per 1000 person-years than those assigned to the group that received standard therapy. However, no improvement was seen in their overall survival rates.

Lead study author Dr. Rodney Hayward of the Ann Arbor VA Healthcare System and the University of Michigan said in a university press release that "taken together with findings from other large studies, we see that controlling blood sugar in diabetes can indeed decrease cardiovascular risk, though we continue to see no effect on risk of dying during the same period. This finding reinforces the importance of combining good blood sugar control with control of other cardiovascular risk factors for a combined effect." (New England Journal of Medicine, June 4, 2015)