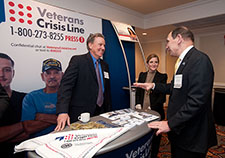 Nearly 200 mental health professionals, caregivers, Veterans and their families, Veteran Service Organizations, members of Congress, and experts from other federal agencies attended a VA-sponsored summit on suicide prevention in Washington, D.C., on Feb. 2, 2016.

The summit, whose theme was "Preventing Veteran Suicide—a Call to Action," was the subject of a June 22 article in Psychiatry Advisor. Author Batya Swift Yasgur interviewed Dr. Peter Gutierrez, clinical research psychologist at the VA Eastern Colorado Health Care System and associate professor in the department of psychiatry at the University of Colorado Denver School of Medicine.

Gutierrez cautioned it is important to note that not all Veterans are suicidal. What is valuable, he said, is to identify those at risk and to engage in prevention and ongoing interventions.

Among the specific risk factors are traumatic brain injury, posttraumatic stress disorder, depression, and chronic painmdash;conditions that often overlap in the Veteran population.

Veterans are far more likely to use firearms for suicidal purposes than non-Veterans, and Gutierrez suggested that psychiatrists not attempt to confiscate the weapons of at risk Veterans, but to try to create "more and more physical distance between them and their weapon," thereby reducing the risk of its being used.

Older Veterans, according to Gutierrez, are at greater risk of suicide than younger Veterans. "Elderly people have had different life experiences, both resulting from and independent of military service. Therefore, they might have increased tolerance of pain that can, in turn, increase the likelihood that they might engage in lethal self-harm."

The longer a Veteran has lived, he said, the greater the likelihood he or she has become inured to the protective mechanisms of pain and fear that typically prevent people from ending their lives.

Remaining cognizant of those who are vulnerable and choosing appropriate assessments and interventions, Gutierrez concluded, are key to reducing the incidence of suicide in Veterans.