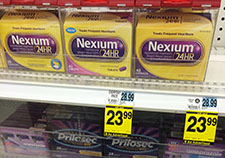 Americans spend nearly $14 billion each year on proton pump inhibitors such as Nexium, according to drugwatch.com. (Photo by Mitch Mirkin)

Americans spend nearly $14 billion each year on proton pump inhibitors such as Nexium, according to drugwatch.com. (Photo by Mitch Mirkin)

Millions of Americans use proton pump inhibitors (PPIs) to treat frequent heartburn. On June 24, Consumer Reports reported on a VA study that found a higher risk of kidney disease among those using PPIs than among those who used a different class of heartburn drugs, H2 blockers.

The study, led by researchers at the VA St. Louis Health Care System and St. Louis University, was published in the April 14, 2016, Journal of the American Society of Nephrology. The research team followed nearly 200,000 Veterans treated at VA medical centers for five years. Of those Veterans, 173,000 took PPIs and 20,000 took H2 blockers.

They found that those taking PPIs had a roughly 20 percent higher risk of developing chronic kidney disease and end-stage renal disease. The authors hypothesized that these drugs might interfere with the body's ability to absorb magnesium, and that deficiencies of that mineral could increase the risk of kidney disease. The drugs may also trigger an allergic reaction that causes swelling inside the kidney and prevents it from working normally.

PPIs are sold commercially under the brand names Nexium, Prevacid, and Prilosec, among others. The leading brand names for H2 blockers are Pepsid AC and Zantac.