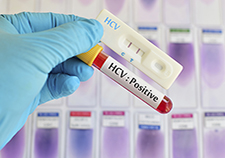 A VA study looked at how age impacts outcomes for Veterans with hepatitis C. (Photo: ©iStock/Jarun011)

A VA study looked at how age impacts outcomes for Veterans with hepatitis C. (Photo: ©iStock/Jarun011)

Elderly Veterans with chronic hepatitis C virus are at a higher risk than younger ones of developing illnesses that make it less likely they will either receive or respond to antiviral treatment.

These findings were contained in a study by researchers with the Michael A. DeBakey VA Medical Center in Houston and Baylor College of Medicine. The study was published in the April 3, 2016, Journal of Viral Hepatitis.

In the study, the research team looked at the records of more than 160,000 Veterans with hepatitis C who were part of VA's Hepatitis C clinical case registry. The Veterans were divided into three age subgroupsmdash;20-49, 50-64, and 65-85. About 37 percent of the cohort was in the youngest group, 58 percent in the middle, and 6 percent were in the oldest group.

The team found that Veterans in the oldest group had the highest risk of cirrhosis (a condition in which the liver does not function properly due to long-term damage); hepatocellular carcinoma (the most common type of liver cancer); and death. They were also the least likely group to receive antiviral treatment for hepatitis C.

The research team concluded that "elderly patients with chronic hepatitis C are more likely to develop hepatocellular carcinoma than younger patients, but have traditionally received less antiviral treatment. ...However, receipt of curative treatment is associated with a benefit in reducing [those diseases] and overall mortality, regardless of age."