Aiming for a simple treatment for a complex neurological disease 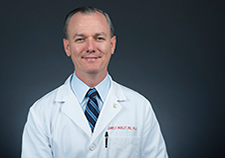 Dr. James F. Morley is a board-certified neurologist with sub-specialty training in Parkinson's disease and movement disorders. He is associate director for research at the Parkinson's Disease Research, Education and Clinical Center (PADRECC) at the Corporal Michael J. Crescenz VA Medical Center in Philadelphia, and assistant professor of neurology at the Perelman School of Medicine, University of Pennsylvania.

VARQU spoke with Morley about his Career Development research award, in which he will investigate the effects of exercise on drug-induced Parkinsonism and Parkinson's disease.

Dr. Morley, can you briefly describe Parkinson's disease and how it affects the body?

Parkinson's disease is a progressive, devastating, neurodegenerative disease that unfortunately does not have a cure. It's been traditionally described as affecting movement, causing difficulty with tremors, as well as slowness and stiffness of movement, and loss of balance.

More recently, it's been appreciated that there are a number of non-motor symptoms that are associated with Parkinson's disease, including mood disorders, sleep problems, and cognitive dysfunction. Those symptoms can actually be more troublesome to patients because traditional treatments for PD are more effective for motor than non-motor symptoms.


How common is Parkinson's disease in the U.S. and the Veteran population?

Parkinson's disease affects about 1 million adults in the U.S. and about 80,000 U.S. Veterans. Additionally, the VA connected Parkinson's disease to Agent Orange exposure for Veterans who served in Vietnam, and many of these Vietnam Vets are in the age range for developing Parkinson's disease. That's made PD an additional priority area for VA research.

Why it is difficult to identify Parkinson's disease in its early stages?

One of the most common early symptoms of Parkinson's disease can be tremor, which is usually obvious and sends people to the doctor. However, not everyone has tremor. Some patients just have slowness and stiffness. At the age range where this is happening, in the 60s and 70s, there's some overlap with normal aging and people say, "Oh maybe I am just getting older and slowing down. It's a little harder to walk." We commonly have patients that have had symptoms for a number of years before they show up in our clinic. That's one part of it.

There are a number of symptoms, including loss of sense of smell or sleep disturbances, that commonly happen in Parkinson's disease patients before the motor symptoms. That provides an opportunity, potentially, to make the diagnosis early. That potential for early diagnosis is part of what we are trying to exploit in the research component of my Career Development award.

How effective are the current drug treatments for Parkinson's disease?

All of the drug treatments that we have for Parkinson's disease really just control symptoms. So they can improve tremor, they can improve walking speed, they can improve muscle stiffness. They can be very effective and improve the motor symptoms for years, but I think that most people would agree that the holy grail of Parkinson's disease research is trying to find treatments that we would call disease-modifying. And that is something that instead of just improving the symptoms in the short term, it can actually slow down, if not stop, the progression of the disease.

Can you explain why exercise is protective for Parkinson's disease?

I talk about this to patients all the time in the clinic. We should really be thinking of exercise as a medicine.

When you look at exercise, the best-characterized benefit is probably for cardiovascular disease, but also there is emerging evidence of benefit for many different disorders, including neurologic disorders. And probably the reason that exercise can reach so many different disease states is that it affects a lot of different biochemical pathways and growth factors. 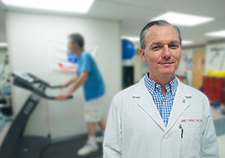 Your Career Development research is focused on investigating the effects of exercise on Parkinson's disease. What do you hope to find?

There's a very strong body of evidence that supports the idea that exercise improves motor symptoms in Parkinson's disease. What is not clear is whether exercise could be a disease-modifying therapy. But there is intriguing evidence that suggests that it could be the case.

There are a number of large epidemiologic studies that have suggested that higher levels of exercise in mid-to-late adulthood are associated with lower risk of ultimately developing Parkinson's disease, suggesting that exercise may delay the onset or protect against development of Parkinson's disease.

As we talked about earlier, one of the perceived limits of disease-modifying drugs is that by the time someone presents with motor Parkinson's disease, there's actually been quite a bit of destruction in the brain. So people are trying to make this diagnosis earlier.

One strategy that we've employed in Veterans is to look at folks who have Parkinson's-like symptoms because of exposure to certain drugs that block dopamine. These are often antipsychotic drugs that are used to treat not just schizophrenia but a variety of psychiatric disorders. What we are learning is that just like running on a treadmill can bring out chest pain or changes on an electrocardiogram, these dopamine-blocking drugs can act as a stress test for the brain. They can bring out motor symptoms in patients with early-stage Parkinson's disease that wouldn't have developed on their own until years down the road.

With the help of VA pilot funding, we conducted a study that found 20 percent of Veterans with Parkinson's-like symptoms caused by one of these drugs actually had findings on a brain scan that looked like Parkinson's disease. Those are the kinds of subjects that we are trying to enroll in the exercise arm of the study.

The overall goal is to conduct a randomized control trial of exercise as a symptomatic and potentially disease-modifying therapy for Parkinson's disease. The exercise subjects are asked to perform aerobic walking either in their homes if they have a treadmill, or in the community if they have access to a gym or track. We are monitoring their compliance using a weekly phone call and remote monitors that can track how much exercise they've been doing. We are measuring a number of different outcome variables, including physical fitness and motor symptoms, as well as blood markers of biochemical changes caused by exercise.

Really the primary goal of the study is to examine whether there are differences in the progression of the dopamine brain scan over one year in the exercise group versus the normal care group.

What do you see as the next steps in your research?

I think there are a lot of places we could go from here. The hope with this study is to test whether exercise has an effect on disease progression. And we are looking at a very specialized population: the patients with early Parkinson's disease that has been uncovered by these antipsychotic drugs. So the next direct step would be to look at a broader population of patients with early to mid-stage Parkinson's—to find if you could see a similar effect of exercise.

I think this concept of exercise as medicine is important and offers a variety of different opportunities. We really push physical activity in the clinic, and we tell patients to think of it like another very powerful medicine. Parkinson's patients take their medicine at least three times a day, and so we ask them to "take their exercise" three to five times a week, which is what the American Heart Association recommends for all adults.

Unfortunately, and not unexpectedly, patients probably aren't 'taking' their exercise as much as we would like. Even if our current study suggests that exercise affects disease progression, much more work will be needed to help us understand how to motivate patients to exercise vigorously, but safely enough to derive the full benefits.