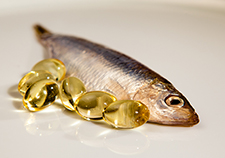 Dr. Mark Yorek, an investigator with the VA Iowa City Health Care System, is studying the effects of menhaden (fish) oil on diabetic neuropathy in rats. He and his team have shown that fish oil can improve and sometimes even reverse nerve damage in the eyes of diabetic rats. The effects were even more profound when fish oil was combined with alpha-lipoic acid, an antioxidant found in the body, and enalapril, a blood pressure medication.

The study results were published in the June 2017 issue of Cornea.

The researchers fed 12-week-old rats a high-fat diet for eight weeks, and then gave them streptozotocin, a drug that is toxic to the insulin-producing beta cells in the pancreas. After the rats had experienced high blood sugar for 16 weeks, the team then gave them treatments that consisted of menhaden oil, Î±-lipoic acid, enalapril, or a combination of all three.

"Treatments were not initiated until after development of significant vascular and neural impairment, including a decrease in corneal sensation and loss of subepithelial corneal nerves," wrote the study authors. This was done purposefully so that the investigators could test for reversibility of peripheral neuropathy and return of corneal nerve function in the rats.

The rats were put through a number of tests to measure blood sugar tolerance, thermal sensitivity, corneal sensation, and nerve conduction. At the end of the study, all treated rats had lost weight. Their non-fasting blood sugar measures had increased significantly, indicating impaired glucose clearance.

However, rats who had received monotherapy with fish oil, Î±-lipoic acid, or enalapril showed lower serum lipid (cholesterol and triglycerides) levels, and those who were treated with a combination of all three returned to normal lipid levels. In a similar fashion, rats who received the combination treatment also experienced a reverse in vascular dysfunction and a return of corneal sensation.

The results of this study are especially useful, noted the study authors, since corneal sensitivity is being promoted as a test for early diagnosis of diabetic peripheral neuropathy.

Diabetes is a profound disease that can affect many areas of the body. The body's inability to process and absorb sugar into the cells for fuel can damage tiny blood vessels and nerves. One painful side effect of diabetes is neuropathy: literally nerve disease or damage.

Peripheral neuropathy can cause burning or tingling sensations in the lower legs and feet. However, nerve damage can also occur in organs like the eye, bladder, or intestines, causing vision problems, urinary incontinence, or diarrhea.