Fixing a failing brain through the gut 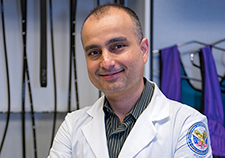 Dr. Jasmohan Bajaj is an associate professor at Virginia Commonwealth University (VCU) and a liver transplant specialist at Hunter Holmes McGuire VA Medical Center in Richmond, Virginia, where he is instrumental in evaluating Veterans for potential liver transplantation. He also conducts clinical and translational research in fields pertaining to liver disease, its effect on the brain, and its effect on the microbiome (the community of microbes that live in the gut) in both Veterans and non-Veterans.

VARQU spoke with Bajaj about the research he is doing to develop revolutionary new treatments for hepatic encephalopathy, damage in the brain caused by a diseased liver.


You have recently finished a clinical trial and are starting another one pertaining to hepatic encephalopathy. Can you explain what that is?

Hepatic encephalopathy is actually epidemic in patients with liver disease and cirrhosis and especially in the Veteran population. What it really means is what the word suggests: hepatic means liver and encephalopathy means disease in the brain. So we believe that it's the liver disease that causes the brain to not function right. When the liver is not functioning properly, it cannot handle the toxins that reach it from the gut, which it normally handles. That causes a state of inflammation throughout the body and toxins also leach their way to the brain. In addition, patients with liver disease and cirrhosis at this stage also get problems with their muscles and their kidneys—which makes this really bad for the poor brain. So, the brain gets it from all sides.

The good thing about this is that if you treat the gut, people do get better, but not completely. Hepatic encephalopathy has two parts: a covert form and an overt form. The covert form is something that is very difficult to diagnose clinically, but if you give people who look completely alert and oriented some cognitive tests they'll score really bad. That happens in about 40â€“50 percent of patients with cirrhosis. The covert stage makes it very difficult for affected patients to conduct activities of daily living. So their quality of life is very impaired, even if they look completely alert and oriented.

In the overt form of hepatic encephalopathy patients get disoriented, confused, they can get lethargic, and it can even lead to coma. The treatment for overt hepatic encephalopathy, once the patient is actually recovered, is to put people on such things as laxatives and non-absorbable antibiotics, which affect their gut to prevent future episodes of encephalopathy.

We have published research which shows that hepatic encephalopathy—the overt form—is the leading cause of readmissions in people with cirrhosis, across North America.

You mention that hepatic encephalopathy and cirrhosis are very prevalent in the Veteran population. Could you explain?

Unfortunately Veterans have an over-representation of hepatitis C and alcohol use disorder, for multiple reasons. They are therefore much more prone to get the consequences such as cirrhosis, which in turn makes them much more prone to get encephalopathy. Cirrhosis is relatively common in Veterans; it is one of the leading causes of illness and death in this population. So therefore, if you have more cirrhosis you are also going to have more hepatic encephalopathy.

Can you tell us about the research you are doing, investigating the use of fecal transplants to treat hepatic encephalopathy?

The fecal transplant seems very radical. However, a lot of our focus in treating hepatic encephalopathy is dependent on the gut. The medicines that are currently used to treat the disease may not be enough to help the patient get better—because ultimately they are not fixing the liver, which is diseased. When that happens, the preferred treatment is a liver transplant. However there are not enough donated livers to make this a viable option for most liver disease patients.

Patients who are waiting for a liver transplant are ranked according to an impartial system that takes into account many different factors. Sicker patients are generally given more points to help put them higher up on the transplant list. However, since 2002, hepatic encephalopathy has been removed as a priority criterion for liver transplantation. If a Veteran has hepatic encephalopathy, he doesn't get any extra priority points for that.

The current treatments for people with recurrent overt hepatic encephalopathy can still result in a lack of response, so that is why we chose this population in this study. We didn't want to take a population that was earlier in the disease process, because we have FDA-approved treatments for them. So we only took people into the study for whom the current FDA-approved treatments have been used and they still have problems with their brain function. 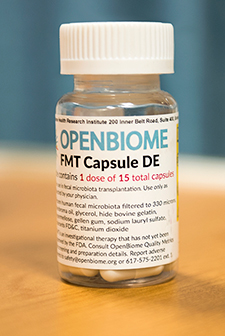 Donated human stool for use in fecal transplants. (Photo by Mary Beatty-Brooks)

Donated human stool for use in fecal transplants. (Photo by Mary Beatty-Brooks)

We randomized these people into two groups. One group we treated with the standard of care. The other group got the standard of care, and in addition to that, after five days of broad-spectrum antibiotics to clear their naturally occurring bacteria in their gut, we gave them one enema from one stool donor. Everybody who was randomized to the fecal transplant group got the enema from a single donor.

What happens during a fecal transplant? Do you actually take a little bit of stool from a healthy individual and transfer that via an enema to someone who is sick?

That is correct. The donor came from OpenBiome, who is our collaborator in this study. It is a nonprofit stool bank. We collaborated in the study with Massachusetts Institute of Technology, George Mason University, OpenBiome, and the Imperial College London.

Ultimately we ended up choosing just one donor, based on the bugs that were missing in our patients. So this one donor's stool was instilled by enema into the 10 people who were randomized into the fecal transplant arm. And then we followed everyone for the next five to six months, per FDA guidelines.

Ultimately we found that this treatment was safe. But what we were not expecting to find was that it was not only safe, it was also effective. It actually reduced patients' hepatic encephalopathy readmissions. In the patients who were randomized to the fecal transplant arm, there were no readmissions for encephalopathy. There were five patients in the standard-of-care arm who were admitted six times over five months; this is what you would expect in the natural course of hepatic encephalopathy. What we did find is that the infections were found only in people who were randomized to the standard-of-care arm. This is very encouraging to us, because these are patients who are very prone to infections, and the treatment seemed to be safe. And the other thing we found is that when we did some specialized cognitive tests, brain tests, patients improved, in the short term.

This study is very interesting in the sense that we did not expect to see these changes. That is why we need to take the results with a little bit of caution because it is a very small sample size, and it is the first salvo. It does need to be repeated and of course we asked the patients afterward, "If you had a choice between a pill and an enema, which would you choose?" And they all chose a pill. That's why our next study that is already undergoing recruitment at VCU and McGuire VA hospital is based on the oral capsules—again, supplied by OpenBiome. Both the enema and capsule are currently approved only for the treatment of C. difficile in the U.S. You cannot get it from OpenBiome or anywhere else outside of a research study for hepatic encephalopathy.

This treatment is pretty revolutionary, yes? Essentially it is not a drug.

It is a transplant; it is considered tissue. It's kind of at a crossroads, because it is not really a drug. With a drug, the FDA requires that the composition of each and every "capsule" is the same. That is not possible in feces; it depends a whole lot on who you are, what you eat, how old you are, what medicines you are on, etc. And it is not really an "organ" so to speak. But it's at a very interesting crossroads, and the FDA has come a long way—speaking with leading patient advocates and groups, especially those with C. difficile, stool banks, and people who want to do this to help their patients. So unlike regular drugs, if it is approved for one condition or disease, you can use it only in those patients. With fecal transplants, you have to talk to the FDA for each and every indication, which is good because their primary goal is to ensure the safety of patients.