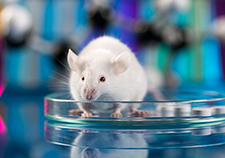 Alzheimer's disease—a neurodegenerative disorder of the brain which leads to dementia—has no cure. At present, there are no drugs or treatments that can delay disease progression, and very few that can help with symptom control.

Hopefully that won't be the case forever.

Dr. Tony Wyss-Coray is a VA investigator with the Center for Tissue Regeneration, Repair and Restoration at Palo Alto, California. He and his team have demonstrated the rejuvenating effects of blood taken from young mice and given to older mice with Alzheimer's-like disease.

The study results were published November 2016 in JAMA Neurology.

The team, which included researchers from Stanford University and the University of California, San Francisco, was interested in discovering if young blood could improve deficits in thinking and memory in genetically modified old mice. To find out, they used transgenic mice that harbored a mutated version of the human amyloid precursor protein (APP) gene, which causes accumulation of beta-amyloid plaques in humans and cognitive defects in mice that are similar to those in Alzheimer's disease.

Wyss-Coray's team gave "young blood" harvested from two- to three-month-old mice to aged transgenic mice via plasma injection or through a surgical process called parabiosis—where two mice are joined together surgically so that they share a single blood circulation. Following surgery, the researchers tested for overall health and recovery by monitoring weight, nesting behavior, grooming, and stress response in the mice.

The results of the study also showed that old APP mice that were paired to healthy young mice experienced an increase in synaptic and calcium-binding proteins after five weeks of shared circulation—proteins that are significantly reduced in humans who have Alzheimer's disease. At the end of the study, the mice were restored to normal calcium-binding protein levels in the hippocampus, compared to the control group.