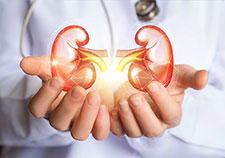 Veterans treated in the VA health system receive more conservative treatment for kidney disease without an increase in death rate, than those treated through Medicare. (Photo ©iStock/Natali_Mis)

Veterans treated in the VA health system receive more conservative treatment for kidney disease without an increase in death rate, than those treated through Medicare. (Photo ©iStock/Natali_Mis)

Veterans who received medical care for kidney failure through VA were less likely to start dialysis, without an increase in death rate, than those who received care through Medicare, according to a study by VA researchers. The study results were published in JAMA Internal Medicine.

Investigators at the VA Palo Alto Health Care System in California and colleagues conducted a study of more than 11,000 Veterans aged 67 years or older who had kidney failure. The team analyzed medical data collected from VA, Medicare, and the U.S. Renal Data System. Their goal was to find out if there was a difference between receiving care through VA or Medicare prior to initiating dialysis.

When researchers adjusted the analysis for variables like gender, race, and driving distance from a VA hospital, the results were consistent—Veterans treated through VA were less likely to die after initiating dialysis.

VA's integrated health care system, write the study authors, appears to support less-intensive treatment for kidney failure, without increasing mortality. They also note that physicians employed by VA do not have a financial incentive to start dialysis, in contrast to non-VA physicians who receive higher reimbursement for seeing dialysis patients.